A Symposium Through the Eyes of a Bolognese

“Which part of Italy are you from?”

My typical answer to this question used to be:

“Bologna…It’s in the center-North of the country”

But, living in Mexico I soon learned that for many people, especially in Spanish-speaking countries, “Bologna” is very similar to “Polonia”—which means “Poland” in both Spanish and in Italian.

To prevent the extremely confused faces I now know so well, I have started answering with a more focused clarification:

“Do you know Spaghetti Bolognese?”

That question receives a happy nod by at least 60-70% of the non-Italians I meet, so I do not have to force them to 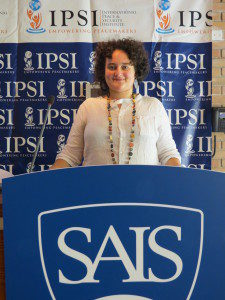 learn about Italian geography (a great advantage, considering that I do not know much about it myself).

Therefore, the amazing speakers and the outstanding profiles of my colleagues at the 2014 IPSI Bologna Symposium on Conflict Prevention, Resolution, and Reconciliation are not the only reason for me to be extremely excited at the thought of spending a whole month in my beautiful hometown. I had many different expectations about the symposium, but I am sure of one thing: none of the participants can go back to their countries and say, “Bologna? Meh…”

I hope they all get the chance to appreciate the variety of things to do, foods to eat, and aperitivi to drink that this city has to offer. All the leisure opportunities here can provide a fun and relaxing “contorno” (the Italian word for “side dish”) to the inspiring work we will be doing in class. The little cafes and pizzeria in the university area, together with the pubs of Via del Pratello, and the open-air cinema in Piazza Maggiore are all great places to unwind after a long day of peace talks.

When I was told this course would take place in Bologna, I thought it was the perfect venue for a meeting of future peace leaders. Bologna is one of the most politically engaged cities in Italy; home to continuous discussion and dialogue between groups with different ideologies. The city is in a region with one of the highest population densities in Italy, but racism is low.

Peaceful and fruitful cohabitation of different groups is not a recent phenomenon. In Italy, where Christian democratic leadership often ruled for fear of Communism throughout the middle of the twentieth century, Bologna re-elected a communist named Giuseppe Dozza (1901-1974) several times. Most Bolognesi would say that Dozza, and the Communist party in general, actively engaged in a serious dialogue with the key Catholic figures of the city in order to able to provide both Communists and Catholics the ability to appreciate and support the work of the social, physical and moral reconstruction taking place after the tragic events of 1939-1945.

To conclude, I am very grateful for the opportunity to re-discover my own city and its surroundings with the interesting people that are attending this year’s Symposium. Between a dish of Tagliatelle al Ragù (the most similar thing to Spaghetti Bolognese), a glass of Lambrusco, and a run in the park Giardini Margherita, I have great confidence that the best ideas for the future of conflict resolution will arise from the collaborative minds of all the participants and staff. 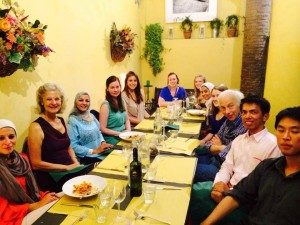