Today’s seminar on July 17, 2018 was conducted by Dr. Doga Eralp, Professorial Lecturer at the School of International Service, American University, Washington DC. Following my formal introduction of Dr. Eralp to the 26 symposium participants, he began his address on the relevance of the variables that comprise conflict diagnosis. 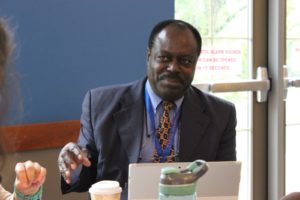 Dr. Eralp subsequently introduced us to six major variables of conflict diagnosis: 1) social and ethnic relations, 2) governance and political institutions, 3) human rights and security centred on the role of media and freedom of expression, 4) economic structure and performance, 5) environment and natural resources, and 6) external forces centred on regional conflicts and the role of the diaspora.

By conviction, I raised my view on the social risks of the identification of the diaspora and the politicisation of media ethics into propaganda as the main issues which constituted the new frontiers of conflict diagnosis. To my surprise, these two concepts generated various debates among the delegates.

First, I discussed the impact of the unethical role of most national media outlets regarding freedom of expression, and how this is used by governments and civil society organizations to incite divisions among national institutions, which are often set up to instruct factions of society to have their own medium of communication including newspapers, magazines, and radios. This view was shared predominantly by most delegates that media propagandas are the sources of serious divisions in their own respective countries among the national institutions often in a form of State initiated propaganda, to divide a nation into various factions, each with its own media service and propagandist agenda. Discussions were also made about the influence of propaganda that is often used by governments as a mean of preparing civilian mood prior to the start of national and often international conflicts and wars.

I also raised the issue of the role of diaspora in regional conflicts, using the story of Cote d’Ivoire under its 1960 independence father, the late Felix Houphouet Boigny, as an example. Boigny initiated the Franco-African loi-cadre policy to ensure that an international initiative, through the Rassamblement Democratic Africain (RDA), allowed citizens of the 15 francophone African nations to travel freely across borders with a mere identification card, with the exception of air travel. This successful international initiative led to a 20% immigration increase of diaspora migrants to Cote d’Ivoire, from all francophone nations as well as non-francophone nations.

On the one hand, the uncontrolled diasporic incursion in Cote d’Ivoire by migrants from African nations led to a period of economic success, referred to as le miracle ivoirien (the Ivory Coast economic miracle), in which the country became the world’s leading producer of Cocoa and third leading producer of coffee after Brazil and Ghana. On the other hand, successive anti-immigrant regimes emerged after the passing of Dr. Houphouet Boigny. The first was the regime of Dr. Konan Bedie, who instituted the policy of ivoirite that was established to identify the native Ivoirians from the non-Ivoirians. This policy was subsequently criticised as xenophobic by opponents of the regime, comprised mainly of migrants from the “diaspora.” This led to the first coup d’état in Cote d’Ivoire in 1999.

The regime following Dr. Bedie’s government was led by Dr. Laurent Gbagbo, who was also accused by the migrant diaspora of carrying over the ivoirite policy. The renewal of this policy similarly led to the same diaspora population colluding with the rebels, and mounting a failed coup d’état in 2003 to topple Dr. Gbagbo. This coup d’état led to the fracture of the country between North and South and an ensuing post-election war in 2010. As a result, a new regime took power of Cote d’Ivoire in 2010, which is currently governed by Dr. Alassane Ouattara’s government.

The xenophobic campaigns led by the diasporic migrants caused the social fracture of Cote d’Ivoire, leading to the country’s first coup d’état since its independence in 1960, a division of the country between North and South, and a post-election war that led to over 3,000 deaths.

Sadly, since the post-election war of 2010, the new regime has been working restlessly towards unsuccessful initiatives to reconcile all of the warring factions; comprised primarily of the diaspora migrants and their local allies as one group, and the indigenous native Ivoirians as the other. Ongoing hostilities are fostered by the same media propaganda that led to the 1999 coup d’état and ensuing war. Presently, propaganda stemming from the country’s media outlets is controlling politicians’ agendas by defending their policies, and swearing allegiance to the leaders instead of promoting media ethics.

The delegates of the symposium unanimously shared my concern that media propaganda and the interference of the diaspora in national politics is a serious impediment to nations’ stability and a contributing factor to the diagnosis of conflict.

For more information about the history of the conflict in Cote d’Ivoire, visit the following sources: