On Wednesday, July 25 we heard from Michael Shipler and Rajendra Mulmi from Search for Common Ground. They worked with us on our facilitation skills, and we did several exercises to practice. One that was particularly impactful to me was in regards to divisions of a country due to a conflict. 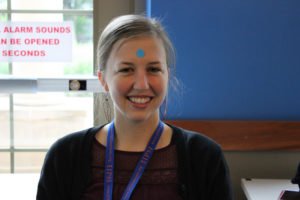 We were randomly given stickers on our foreheads – either blue, green, or red. Then we were each provided with ‘different’ instructions, telling us to pursue those with blue stickers, tolerate those with green stickers, and avoid those with red stickers. At first, we assumed that we had each received different instructions, but soon realized that we were all given the same rules. The exercise was used to illustrate the way a society can divide so quickly, typically due to arbitrary societal rules. As a facilitator, it is imperative to understand that divisions run deep, and one’s identity might be tied up in their membership in a given group.

Following that exercise, we examined a case study on an event that took place in 2010, when an Islamic community planned to build a mosque near Ground Zero in Manhattan, the site of the 9/11 attacks. We had to determine the root causes of the conflict, and then come up with a framing question that would make both parties interested in coming to the table. When facilitating a discussion, it is crucial that the facilitator be impartial, so that all parties are able to come to the table in good faith.

It has been helpful to develop these skills in this IPSI cohort, because we come from diverse backgrounds and experiences. As we were trying to develop questions, ones that I thought were impartial actually seemed quite biased to a teammate from a different country than myself. IPSI has helped me to see global issues from other perspectives, and has allowed me to ask questions of fellow practitioners to deepen my understanding of work across the world.