As part of the Symposium curriculum, my colleagues and I had the opportunity to visit the Peace Support Operations Training Center (PSOTC), a division within the Bosnian military. This visit unexpectedly posed the greatest challenge to our perceptions of barriers for sustainable transitions. In a “traditional” transition, integration of warring parties is often the final and most difficult piece of the puzzle. Governance disputes can resolve through the strengthening of democratic processes and justice systems can become more transparent and objective. But how do you encourage groups with no perceived commonalities to fight together instead of against one another? 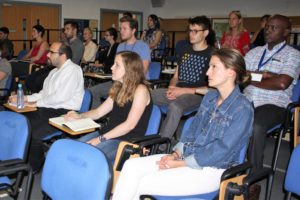 Yet, Bosnia and Herzegovina appears to have the reverse problem. Its military has become fully integrated, with Bosniaks, Serbs, and Croats serving side by side in the interest of protecting their civilian counterparts. Our speaker, Lt. Colonel Fariz Fazdan, provided us with invaluable insight into how the Bosnian military has become a national example of successful integration. The three (yes, three) governments of Bosnia and Herzegovina regularly politicize ethnic divisions to their respective advantage and make full reconciliation difficult to achieve.

As Lt. Colonel Fazdan put it, ethnic divisions no longer matter when you are on the frontlines in Afghanistan fighting a common enemy. While shared battlefield experience is undeniably a contributing factor, I believe PSOTC deserves a share of the credit as well. PSOTC provides NATO-approved trainings to personnel in the Bosnian Army on topics such as Building Integrity and Utility of Gender. PSOTC provides opportunities for military members across varying ethnicities and backgrounds to interact in an informal setting and further strengthens the existing integration of military groups. PSOTC has trained over 5,000 members of the Bosnian military. In contrast, the Bosnian public education system still segregates itself by ethnicity, limiting interactions between Bosniaks, Croats, and Serbs and making normalization of interactions that much harder to achieve.