Rape: A Weapon of War Across the Globe

The former president of Kosovo, in power from 2011 to 2016, Atifete Jahjaga, despite her hardships in reaching the Sarajevo School of Science and Technology, arrived and delivered an empowering speech, largely reflecting the role of women in the Bosnian Conflict. Despite being another state alongside Bosnia, which was once part of the former Yugoslavia, Kosovo is not recognized by the Bosnian government as a legitimate state. Therefore, in the eyes of the state, even the former president is considered a stateless individual. 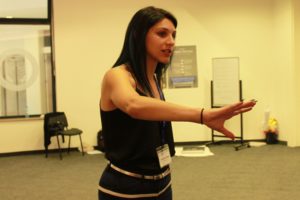 The fact that despite these challenges she still persevered to make it to us and speak to us, I think exemplifies what it was that she came to speak to us about and why Kosovo’s transition to post conflict was as successful as it was. I was truly inspired by the history she recalled, her own in particular, and how essential women like herself were in rebuilding the state.

During my time at the Simon Skjodt Center for the Prevention of Genocide and as a graduate student studying human rights at American University, I worked on researching and monitoring the situation in the Central African Republic, and in particular the epidemic of sexual violence taking place within the conflict. President Jahjaga’s talk was extremely engaging and the discussion of rape as a weapon and tool for ethnic cleansing vividly reminded me of my studies and work with the CAR where the same thing is currently happening. In this case, not only are women being sexually assaulted, raped, and forced into domestic and sexual slavery, in many cases the women are not even used in this way in their own right as a woman, but seen as a man’s property which by damaging, the men can be hurt. Like the case of Kosovo, where impunity for sexual crimes is dominating, CAR has yet to hold even a single perpetrator accountable for the more than 2,500 instances of sexual violence recorded.