Walking downtown in Sarajevo gives me feelings of peace and happiness. The similarity in the culture makes me feel at home. I came from Damascus where sitting for a cup of coffee means a long conversation about everything important and unimportant in life,  just like they do here. I was walking around amazed by the similarity between the streets here and in my country. Until I had the Tour of Sarajevo war sites. 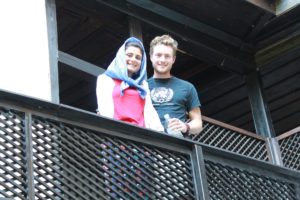 The tour was guided by Carolyn Edgerton. Carolyn is an International Criminal Lawyer, she worked with the office of the prosecution at the International Criminal Tribunal for the former Yugoslavia (ICTY) and she was part of the team who prosecuted Milosevic, Karadzic, Mladic and others. Carolyn arrived in Sarajevo at 1994 when the war was not completely over yet. Carolyn walked us through the city telling us stories from the war at almost every corner.

We stood next to a memorial where a little boy was shot by a sniper just in front of a UN peacekeeping soldier. And other memorial represent a victim from Srebrenica.

After this tour, my view of the city changed. Each time I see an old person I try to imagine how old he was during the war,  did he run away and come back later, was he perhaps a refugee in another country, or did he maybe take up arms and killed someone himself?  I started also think about the future of my country. This is Sarajevo; more than 20 years after the war the people seem to have restarted life.  How will we be after 20 years?

Each time I pass by a memorial I remember the story, I  don’t know if all these thoughts during my walk are good or bad, but I know that this tour gives those victims a name. They are not numbers anymore.