The Jewish Middlemen of Bosnia

I had the pleasure to celebrate Shabbat with members of Sarajevo’s Jewish community. The community, which began in Sarajevo in the 1560s from Spain, is now quite small, due to both the holocaust and the war in Bosnia. I met one elderly woman who was born and raised in Sarajevo. During the war she was brought to Israel, but returned in 1998. “This is my home,” she told me. 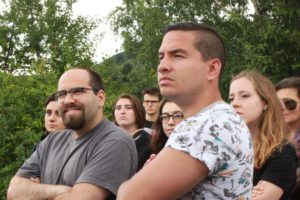 This interaction, and last weekend’s trip to Mostar, reminded me of the role that Bosnian Jews played during the war. The war in Bosnia was one of the few European conflicts where it was safe to be Jewish. “The Serbs viewed themselves as fellow holocaust survivors,” said William Stuebner. “The Croats didn’t want to be seen as Nazis and the Bosnian Muslims have always been friendly with their Jewish neighbors.”

Many Bosnian Jews used this status to help their neighbors on all sides. The holocaust museum Yad Vashem tells the story of a Bosnian Muslim family that hid their Jewish neighbors during World War II, with the Jewish family working with the State of Israel to resettle the family in Israel during the war in the 1990s. William Stuebner tells the story of Jakob Finci (who spoke to us on Monday), who provided transit documents for Serbs, Croats, and Muslims to escape the country during the war by hiding them as Jews.

In Mostar, Zoran Mandlbaum used his position as head of the local Jewish community to provide basic needs to citizens of both East and West Mostar, deliver letters to prisoners at concentration camps, and helped organize a wedding between two multiethnic lovers.

Unfortunately, many of these stories are unknown, lost amidst the conflicting narratives and various atrocities of the war. As the country attempts to move forward, it will have to come to terms with both the good and bad of the country’s history.