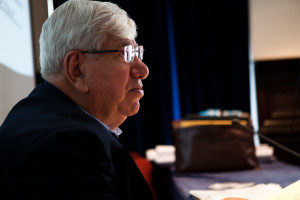 Ambassador Jacques Paul Klein is a man with rich and pragmatic advice to give: “don’t mistake enthusiasm for competence”, “if you continue to ride a dead horse, don’t expect it to take you very far” and my personal favourite: “if you start out and you don’t know where you’re going, you’re probably going to wind up somewhere else”. He gives this advice with good reason.

Ambassador Klein has served in three high-profile UN missions: he worked as an Under-Secretary General in the mission for Eastern Slavonia, Baranja and Western Sirmium (UNTES), as Principal Deputy High Representative for Bosnia and Herzegovina (UNMIBH), and most recently as Special Representative and Coordinator of United Nations operations in Liberia from 2003 – 2005 (UNMIL). He knows better than anyone the necessity of preparation, planning and understanding the situation on the ground, before embarking on peacebuilding and diplomatic exercise.

The message Ambassador Klein gave from his experiences: that equipment may be lacking, that funds may be diminished and that missions will likely be complex and gruelling, only made his achievements more impressive. He spoke highly of the peacekeepers who worked with him, praising engineers, medical and police officers for their contributions to missions. He also stressed, as have previous lecturers that the worst mistake one can make in an intervention would be to import ideas onto a state, as these are unlikely to ‘stick’ in the long run. Information gathering and an understanding of local traditions is critical, as is developing a relationship with neighbouring countries, who have the potential to act as allies in the long run.

During our lunch break; Ambassador Klein screened a documentary about the massacre at Vukovar Hospital during the Croatian War of Independence, and the subsequent exhumation of the bodies in 1996. The movie brought home the fine line the UN had to tread between supporting the families of the victims in their wish to memorialise and grieve, and conducting a thorough recovery, examination, and identification of those massacred and buried in the mass grave. It was also a heartbreaking insight into the realities of these missions. It is altogether too easy to be critical of the efforts made by the UN: we have discussed at length how the imposition of (often Western) structures and institutions has influenced the direction of Transitional Justice and peace keeping. Until we are able to form an understanding of the myriad complexities of conflict, we should appreciate the immense effort put in by peacebuilders who work to follow through on promises of reform, safety and hope for the future.