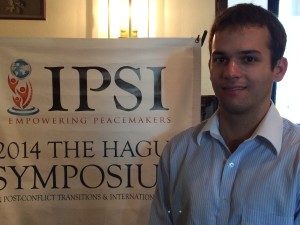 As an International Peace and Security Institute participant who had the pleasure of attending last year’s Bologna Symposium on Conflict Resolution, I am grateful for the new insights I have gained by attending this year’s program at The Hague.  IPSI continues to offer an engaging and nuanced learning experience founded upon three incredible pools of assets: participants, speakers, and simulations.  Having met a group of ambitious, intelligent, considerate, and vibrant participants to rival last year’s in Bologna, each program simulation offers a chance to test negotiation, communication and facilitation skills amongst personalities possessing a broad range of experiences.

Having tackled simulations on potential International Criminal Court prosecutions for Ukraine and on measuring transitional stabilization in the Philippines, I began to feel more comfortable with uncertainty, complexity, and disagreement.  Undoubtedly, IPSI simulations challenge participants with streamlined or focused objectives to keep an otherwise unwieldy conflict area manageable for a time constrained group exercise, but those variables remain ever present.

However, our most recent simulation on disarmament, demobilization, and reintegration (DDR) was the most challenging I 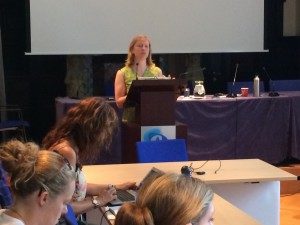 have experienced so far in either IPSI program.  After Dr. Jasmine Westendorf helpfully illustrated how Liberia’s DDR process failed and led to the formal codification at the international level of several DDR best practices, we conducted a group negotiation mirroring Liberia’s efforts hoping to achieve a more creative and sustainable framework.  I co-represented the Liberian Transitional Government’s position in these negotiations alongside others representing international stakeholders.

Our group struggled with the sheer breadth of considerations relevant to DDR planning and processes.  After quickly debating methods to incentivize disarmament and to compel rebel leaders to participate in a state-sanctioned process, it became clear that we needed to pay more attention to questions of justice and local community needs.  In turn, we noticed the clear tension between establishing practical incentives to enlist rebellious actors in such a DDR process and community needs regarding justice, forgiveness and reconciliation.  Of course, this problem is apparent to many who work in conflict areas and international peacekeeping.  I believe this imperative to reconsider community needs, grievances and demands for justice is reflected in common variations of the general refrain: ‘there can be no peace without justice.’

Despite internal security, infrastructural capacity and transitional governance issues at the domestic level dominating my character’s motivations, the regional dynamics and bilateral relations with Sierra Leone, Guinea and Cote d’Ivoire proved impossible to ignore.  If regimes in Sierra Leone and Cote d’Ivoire were intent on fueling instability in response to their own political crises or if territorial borders were to become meaningless, any Liberian DDR process would inevitably fail. 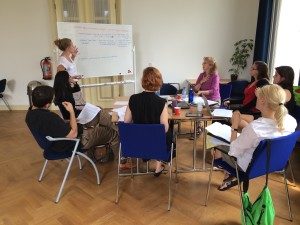 I loved juggling these dilemmas and attempting to comparatively weigh costs within our group as we debated a variety of options. These discussions suited my interests in African politics, foreign policy and security, while reminding me of my conversations last year with Betty Bigombe.  That IPSI’s simulations inevitably force participants to consider these complexities is a credit to how the program staff endeavors to base these exercises on real world dynamics.  Congolese activist Kambale Masavuli’s words usefully clarify how one must consider regional context and neighboring conflicts in relation to one’s own domestic situation: “If Rwanda and Uganda had peace and democracy and opened up political space along with a genuine inter-Rwandan and inter-Ugandan dialogue that would bring peace to the region.”  By substituting Sierra Leone and Cote d’Ivoire for Rwanda and Uganda, I better appreciated the importance of addressing these parallel conflicts for the sustainability of any DDR mechanisms in Liberia.

Frankly, our group’s final DDR plan was less remarkable than the discussions that preceded it.  Taking the lessons from the transitional stabilization exercise premised in the Philippines (as expertly detailed by my friend and colleague Sophia Carrillo), our group tried to craft Liberian DDR mechanisms that would attract local support.  Often times, this meant devolving the physical implementation of any state- or international-designed process to the communal level.

In tackling such overwhelmingly complex problems, William Stuebner proved incredibly insightful.  Using his background working for the Prosecutor’s office at the International Criminal Tribunal for the former Yugoslavia as well as his knowledge of DDR processes in the Philippines, he counseled us on creative ways to devise a successful DDR framework.  Without question, my time spent in The Hague has already exceeded my high expectations.