International Negotiation Training with a Professional 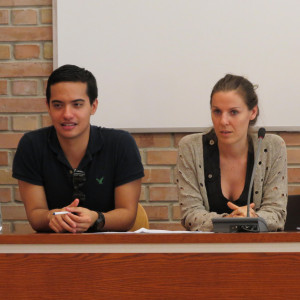 The second week in Bologna was even better than the first! It was all about conflict resolution and the biggest part of the week was spent learning about international negotiation from Wilbur Perlot, Deputy Director of the Clingendael Academy. Responsible for international skills training and training on EU affairs, Wilbur delivers 40+ negotiation training sessions each year, and has trained senior military staff, diplomats, civil servants, and private sector employees from many different countries. Essentially, there aren’t many people better fit to facilitate training in negotiation skills and we as a group were privileged to have him with us.

On Thursday, Wilbur introduced us to more mediation and negotiation tools and techniques.  We also talked about strategies for dealing with different group dynamics with regards to both the opposing side as well as your own side. Talking about these different approaches was beneficial because during a simulation the previous day many participants (including myself) had trouble coming to an agreement. It is one thing to intellectually understand negotiation principles, techniques, and theory, but it is another thing entirely to put them into practice whilst simultaneously dealing with conflicting opinions, group dynamics, and your own frustration. In addition, he also gave us a “Workbook of International Negotiation”, which was packed full of notes and tools. I will be sure to keep it safe and refer to it often!

We attempted to apply the tools provided to a simulated negotiation between the Ugandan government and the World Bank. This simulation was based on real-world negotiations that took place over the course of 18 months in the 1990s. I was a member of a four person World Bank delegation talking to a four member Ugandan delegation.

Right from the start, our team attempted to put ourselves in a position to achieve a settlement more favorable to us. Our first step before beginning the negotiations was to note what our strengths and weaknesses were and, conversely, what they were for Uganda. We also identified where we were willing to compromise and how we were going to operate during the negotiations. Most importantly, we chose a team leader through whom we would run our side of the negotiation with a unified voice and direction.

When the actual negotiation started things went surprisingly smoothly (or at least, more smoothly than I thought they were going to go). Although the Ugandan delegation was, on paper, supposed to be difficult regarding how much money went to the military, we were able to work out a deal in which money spent on the military did not go toward fighting the rebels in the north, which was what the World Bank wanted. Unlike previous simulations, I walked away with both a deal and a feeling of satisfaction.

Overall, Wilbur Perot has been my favorite speaker thus far at the 2014 IPSI Bologna Symposium. Although the other speakers were great as well (especially Ambassador Jan Eliasson!!), I am a big fan of practicality and action, and Wilbur Perot placed great emphasis on both. I know I will apply his training to future endeavors in both my personal and professional life.