Is reconciliation always feasible and necessary? The first part- feasibility- might be a quite obvious maybe or even no. One of 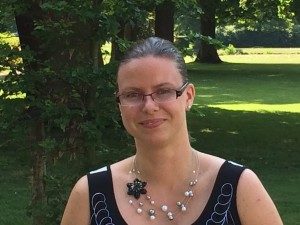 the most striking realizations personally, however, was that maybe the answer to the latter- the necessity of reconciliation- could be no also as far as Dr. Valerie Rosoux was concerned. Coming from a background of political/ social psychology I am a firm believer in a resounding yes, however idealistic this may seem at first.

In a symposium that focuses on the legal aspects of post-conflict societies, I found myself in a conversation in which Dr. Rosoux was able to conceptualize the complexities of human memory vividly and concisely. Given her longstanding experience in peacebuilding and negotiation in international affairs, both in theory and field-work, she engaged our diverse group in a discussion about the meaning, structure, and limitations of reconciliation and memorialization. So why do I remain firm in believing that reconciliation was necessary in all circumstances? Let me try to explain.

The question of who we are is in its core one of identities. Whichever identity we chose to make most salient also brings with it the memories tied to the group we connect with as part of that identity. Individual and collective memories are therefore two sides of the same coin that making up human experience thorough life. Yet the relationship only begins at the realization that both types of memories exist and that they are not always compatible. Nevertheless, contending with both is vital in what Dr. Rosoux calls demobilizing minds after a conflict situation. Conflicts turn society into groupings of ‘us’ versus ‘them’ along identification lines which in turn influence issues of processing and memorization of information. Dr. Rosoux showcased the issue of turning society on the ground from past oriented to future oriented. In order to do this memories and narratives of the conflict need to be worked on. Exactly this is where the process of reconciliation comes in. How elaborate the process is, became clear during our day with Dr. Rosoux. 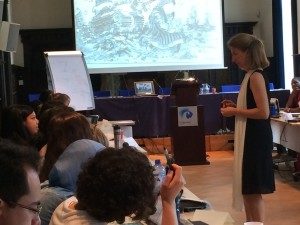 After questioning the need for a definition of definition or the feasibility of one, the bulk of the morning was spend on considering of the procedure of reconciliation. Afterwards we discussed the context, agency, and timing of reconciliation. How to overcome the divergence of parties is at the heart of this question. For me this divergence is one of narratives and the memories that underlie those narratives. As Dr. Rosoux put it, memory is not the repetition but the reconstruction of the past. Reconciliation is a reconstruction also- a reconstruction of narratives and identities away from incompatibility towards mutual acceptance and eventually to a single agreed upon narrative. This last part is where Dr. Rosoux and I differ, as she believes the agreement on one narrative is not necessary.  Maybe accepting the other side’s story as equally legitimate is enough to stop violence, enough to life peacefully next to one another, but it is not enough to allow for social integration and unity. Perhaps this is only important for internal conflicts and two warring states can quite simply make do without integration of the population. But forgive me for a few biases that do not allow me to dwell on these examples- dwindling in numbers as international armed conflicts are. I am living through a European integration that is only possible because former mortal enemies France and Germany have found a common narrative. Moreover, the situation of Palestinian citizens of Israel is foremost in my mind when I write of this and while a future (if ever feasible) independent state of Palestine may live next to Israel, their status as Israeli citizens complicates this two state solution. We have to at least ask the question whether it is not imperative that they are able to fully integrate into society and whether that takes more than acknowledgement of their separate narrative, but also the finding of a mutual narrative within Israel.

Dr. Rosoux also held up a mirror to peacemakers and advocates for reconciliation in the broader sense. She faced us with the question of who we want reconciliation for- us, the outsiders to the conflict in question or the society concerned? For me this is the strongest critique of the necessity and feasibility of reconciliation. Because I consider the reworking of narratives as paramount, an imposition from the outside is out of the question in terms of helping a society find itself again. One cannot impose a new identity from the outside, nor can it be indoctrinated sustainably from above. I have acknowledged some of my biases above, and I think that Dr. Rosoux’s mirror resonates with all of us in different ways. And maybe this mirror most importantly helps us identify our biases when we consider whether reconciliation is always feasible and always necessary- regardless of the answer we may give.