We concluded the first week of the Symposium with husband and wife team John Marks and Susan Collin Marks. They are the founders, President, and Senior Vice President, respectively, of the peacebuilding organisation Search for Common Ground (SFCG). This dynamic power couple has over 52 years of combined experience and we were privileged to listen to their efforts firsthand.

While you could write a series of books on their peacebuilding adventures – some of which have already been published by Susan herself – I have chosen to reflect on some of the key points of resonance from the last day and a half. 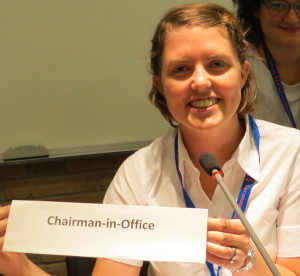 globe, John and Susan introduced IPSI’s 2014 Bologna Symposium participants to some of SFCG’s many programs. Through 53 offices and almost 1500 partner agencies, SFCG casts a wide net across a range of conflicts where its projects are designed to be effective and long-term. One example is their work in the Democratic Republic of Congo (DRC). Relative to the context, SFCG peacebuilders there are seeking to reduce and prevent sexual and gender-based violence, a particular issue largely perpetrated by the DRC military. Using a variety of tools, SFCG utilizes workshops, participatory theatre, and radio programs to educate and ultimately influence a cultural shift away from this violence.

Media also forms a huge part of SFCG’s work in other regions of the world. They’ve had huge success with ‘soap operas for social change’. Across 15 countries, SFCG has produced a television and radio series called The Team, which uses football (soccer) to inspire communities to unite for a common goal (the football game) regardless of their social and cultural differences. In regions where football is not the primary sport, SFCG has used the preferred sport – for example, cricket in Pakistan and Sri Lanka. Each series reflects the unique communities and social norms within each country to provide viewers with a reflection of their reality, including their ongoing conflicts. This series has been internationally recognised for its overall effectiveness and subsequent positive change in areas of conflict.

Beyond their programs, John and Susan provided a reflective and refreshing view on the concept of leadership. They hold to the Confucian philosophy: If you want to be a leader, you have to be a real human being. In this regard, John and Susan undoubtedly practice what they preach.

John and Susan discussed their breadth of experience across their respective careers sharing sometimes very personal stories. John told of the experiences which lead him to establish SFCG following a career in the US Foreign Service and then as a best selling author. Through her mother’s opposition to apartheid, Susan was initiated into peacebuilding at a young age. She reflected on this childhood in South Africa and the difficult decisions made by her mother in opposing apartheid and how it has shaped her life.

Susan and John’s raw honesty, self-reflection, and sheer perseverance not only produced tears and applause, but also provided IPSI participants with a foundation from which to pursue our diverse paths to leadership in the peacebuilding arena. 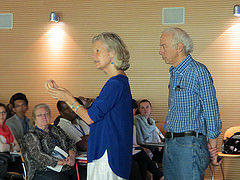