“Shining a Light in a Dark Place”: Peacemakers convene in the City of Peace

How far would you go to learn how to cultivate peace in the midst of conflict? For many of the participants in the 2014 IPSI Symposium on Post-Conflict Transitions & International Justice at The Hague, the answer is several thousands of miles. From all corners of the world and all walks of life, thirty-six peacemakers descended upon The Hague on July 12 for four weeks of intensive lecture, training, and conversation in order to develop their skills and gain new information that will help them make a difference in the lives of others. Even before Sunday, the “official” welcome to the IPSI Symposium, many of the participants had already begun to talk with and get to know one another. So, by the time the bus came to take the group on a tour of the city, participants were already sharing stories, ideas, and information with each other.

The bus was filled with laughter and conversation, a great start to this unique opportunity. The tour guide, Reggie, was a wealth of information regarding The Hague’s political and social history. Throughout the tour, Reggie explained how the city survived and transformed during several wars, an historical example of the importance of post-conflict transition. Perhaps the most anticipated part of the tour was a visit to the Peace Palace, which is, for some participants, a physical reminder of the constant vigilance of peacemakers in seeking justice around the world. 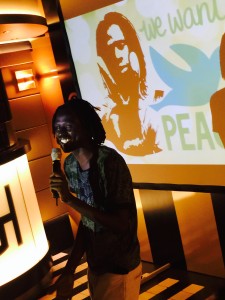 For any gathering of innovative minds, it is custom to ask for a few words of wisdom and inspiration from someone for whom the subject at hand is of great interest. For the peacemakers attending the IPSI Symposium, that person was Emmanuel Jal. Upon arriving at the keynote and dinner venue, participants were encouraged to continue to get to know one another over cocktails. Shortly after arriving, and with an infectious energy and enthusiasm, Emmanuel Jal took the stage for an incredible performance of his music. Emmanuel’s words seemed to resonate with everyone in the room, reminding each participant why they had traveled all of those miles to spend four weeks in the City of Peace. As he spoke about his life as a war child and his work as an activist for the rights of children affected by war, Emmanuel was able to look into the eyes of every participant, touch their hearts with his words, and inspire a renewed resolve to seriously consider the ways in which they, as peacemakers, could use their knowledge and talents to alleviate the effects of conflict and prevent renewed violence. It was a powerful and moving event for each person in the room. Afterward, Emmanuel took the time to speak with participants and, not only offer his own wisdom, but ask participants about their experiences with peacemaking. By the time dinner was underway, Emmanuel had, in many ways, revealed the natural bond amongst the IPSI participants – that each person was passionately dedicated to bettering the world by finding new and more effective ways to bring peace to places of conflict.

The energy of the night before was still evident the next morning when the group arrived, for the first time, at the Clingendael Institute. This building and its beautiful grounds serve as the main venue for the IPSI Symposium at The Hague. The first day at Clingendael included an educational tour of the facility by Deputy Director of the Clingendael Academy, Wilbur Perlot. Participants were given the history of the estate as they walked along wooded pathways, beside ponds, and across bridges. Participants were then given an in-depth overview of what they should expect in the coming weeks with an opportunity to ask any questions they had about the program. Coffee and tea breaks were had throughout the day, as well as a catered lunch at the Clingendael Institute. These breaks were a chance for participants to enjoy the grounds, chat with one another, or review symposium materials. The final session of the day included a break-out session, whereby participants met with the small group to which they were assigned to work. These small groups were formed as a way for participants to go more in-depth into the material presented on any given day of the Symposium. On this day, participants were able to learn more about these group members, which is intended to cultivate a more enriching experience throughout the Symposium.

The start of the 2014 IPSI Symposium at The Hague has been an unforgettable experience for participants and staff alike. The energy and willingness of participants to go the extra mile to learn what it takes to make peace work is palpable. In the halls and common rooms of the Skotel, the Symposium participants’ main residence, introductory conversations have already evolved into project brainstorming, problem solving, and collaboration. If the past forty-eight hours have been any indication of the weeks to come, this year’s Symposium will succeed in, not only provide a once-in-a-lifetime opportunity for 36 peacemakers from all over the world, but will also produce pioneering and effective solutions to the world’s most dire conflict situations.