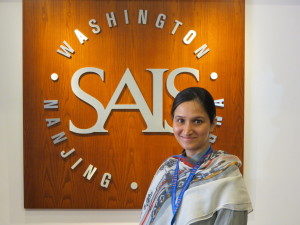 Participants coming from diverse backgrounds, origins and cultures widen the message of coming together for a cause, to understand and respect each other’s norms, values and traditions. In a larger perspective this enables us to share our efforts and to lead the messages of peace among ourselves.

As we gather together here, to learn new skills and share our experiences of peace making processes, it is our realization that the basic cause of conflict is misinformation and fear of threat from another party be at individual level or at a collective level or as a nation. Somehow, everyone believes he/she is the victim.

We had a lecture with Dr. Terrence Hopmann (Professor of International relations; Director of the Conflict Management Program, Johns Hopkins University SAIS, IPSI). He talked about prevention of Inter/Intra state conflict & the role of International actors.

His emphasis was on the crucial role played by multiple organizations, particularly those that are working as peacemakers and mediators. The idea of building bridges sparked in my mind the need for such organizations to focus on confidence building measures, find the common ground and create an environment based on mutual interest where conflicting or disputed areas can be gradually reached out.

Just after the initial sessions, I am getting familiar with the symposium concept!

Dr. Hopmann’s session ended with the participants eagerly participating and keen to see the proactive role of different organizations like UN-led missions including peace keeping missions, forces, civil societies stakeholders, peace activists, academia, bureaucrats, politicians and policy makers, media, and the military, given that peace building is not  an isolated effort but a range of efforts at multiple levels, from grass root to policy making levels.

There is a strong urge in societies to have spaces available to share, learn and de-learn the discourse for a peaceful and prosperous society. In this modern age of complex conflicts around the globe it is very important to engage different audiences, especially the youth, and encourage them to acquire skills so that they too can play an active role both as individuals and as leaders in peacemaking.

Last but not least, we eagerly hope to live what Mahatma Ghandhi said, that is, “We must be the change we wish to see”.