Pray the Devil Back to Hell… 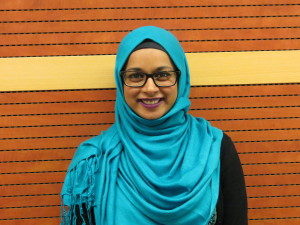 Yesterday our class had the great privilege of hearing from Joyce Neu, a conflict resolution specialist and the first team leader of United Nations’ Standby Team of Mediation Experts. However, it was Joyce’s work in the role of women in peace processes that really touched me. We learned about the importance of the role of civil society in a peace process, for in the end it is the people who will have to live with the consequences of what ‘mostly warring men in closed doors’ will decide on.

This led us to the screening of the documentary, Pray the Devil Back to Hell. The story of the successful struggle of Liberian women to bring peace to their country. In the beginning I was extremely surprised that I had never heard about the Liberian conflict that escalated in the early 2000s. I was slightly embarrassed that I had no idea that a country had gone into civil war during my lifetime and I did not even hear about it. This made me think about how the media truly picks and chooses what to shed light on and what it might deem newsworthy or not. I can remember hearing of Darfur at this time, but nothing of Liberia.

Pray the Devil Back to Hell is a powerful example of the power and role of women in the entire spectrum of the peace process. Firstly, these women joined together regardless of having differentethnic and religious backgrounds, a feature that seemed to 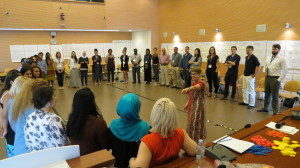 have divided the nation. Muslims and Christians worked together to call for an end to the violence that had gripped their country for years. They used the media, particularly the radio waves to stage protests that eventually led to them getting an audience with the President, pressuring him to go accept going to the peace table. They then did the same with the rebels.

They used their momentum to continue to put pressure on both sides during the talks, even while war broke out in the capital. When they saw the war escalate, they staged a sit in at the talks to force the sides to see reason. This, was the turning point and both sides agreed on an agreement within two weeks. Not only this, but they continued to put pressure on the transitional government to ensure the implementation of the peace process.

For me, the power of these women is astonishing. At this point it is amazing for me to see that two groups that are known for raping women and killing indiscriminately, listened to these women and felt pressure being exerted on them to reach a peace deal. What changed here? How did women who for so long lived as victims and were constantly under the threat of violence be able to change the power dynamics where they had the ability to pressure these groups to agree to a peace agreement? Was it the fact that they were no longer scared? Was it that they were united? Muslim and Christians working together? Their faith? Was it that they mobilized thousands of others to support their cause and thus could not be ignored any longer? I think the answer might be that it was a combination of everything. In the end, it was their undeniable and unshakeable resolve to achieve peace, so that their children may live in a better Liberia. They prayed the devil back to hell…