D.C. Symposium 2018, on the New Frontiers of Peacebuilding

Goal of the symposium

The inaugural D.C. Symposium on the New Frontiers of Peacebuilding brought together 27 participants from across the globe from July 14 to August 3, 2018 in Washington, D.C. 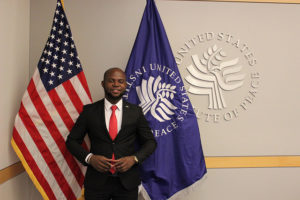 These participants learned advanced practical peacemaking and peacebuilding tools, with a special focus on innovative approaches for building peace in their communities and across the globe.

The symposium was organized by the International Peace and Security Institute (IPSI), a D.C.-based educational and training non-profit with a mission to empower the next generation of global peacemakers. Most of the speakers were faculty members from the American University School of International Service (SIS), the main program location.

Most of the participants were practitioners working in different conflict zones across the globe. As a group, they learned fundamental concepts of conflict diagnosis, analysis, mitigation and management. Speakers included professionals of peacebuilding with extensive knowledge of conflict management who shared their experiences and new approaches to conflict resolution and peacebuilding.

The training of conflict resolution was most focused on practical skills and concepts of peacebuilding and reconciliation such as mediation, facilitation and negotiation. Working in subgroups, participants were empowered to practice their new skills during a simulation at the conclusion of the academic sessions.

During training about religion and peace, the use of technology for peacebuilding and countering global threats was explored. Violent extremism has become a global challenge and we must all learn how counter and transform violent extremism in our nations and at our borders.

Cameron M. Chisholm, president and founder of the International Peace & Security Institute (IPSI), shared his insights about the connection between religion and peacebuilding. Participants learned religious normative language and how to use religion in peacebuilding.

Lessons learned during the D.C. symposium

The goal for most peacebuilders is to create a better place for everyone to live in this world. In most conflict zones like Mali, Nigeria, the Ivory Coast and South Sudan, there is no such training or skill building programs. The symposium’s training tools, materials, resources and interaction with university professors offered practitioners a chance to understand the fundamentals of peacebuilding and learn new approaches to handle challenges in the field.

The symposium was not only focused on academic sessions. Participants had the opportunity to visit several key sites in Washington, D.C. At the Washington Cultural Heritage Mall, they learned from the past and moved forward.

They also toured the United States Institute of Peace, an American non-partisan, independent, federal institution that is involved in conflicts around the world. As peace builders, participants learned more about the work of the institution from its staff members.

At the World Bank, participants heard a presentation of a research paper titled “A Pathway for Peace,” completed in collaboration with the United Nations.

All participants who successfully completed the Symposium on the New Frontiers of Peacebuilding received an IPSI Post-Graduate Certificate in International Conflict Management. Those who submitted a memoir about an academic session graduated with distinction. The memoirs will be published as the official report of the 2018 symposium.

My own story about peacebuilding

I have a deep passion for peacebuilding. My own story traces back to the civil war of Mali in 2012, when separatist and Islamist militants linked to Al-Qaida occupied northern Mali. As a native of the fabled desert city of Timbuktu, I earned a master’s degree in English language and literature and decided to use the cultural heritage of my homeland as a catalyst for lasting peace and the eradication of violent extremism.

This symposium was my first professional training in peacebuilding and one of the most important experiences because I learned innovative initiatives directly related to violent extremism. The valuable resources and tools I received from this symposium will be applied to my work. They will empower my communities on the edge of the Sahara desert to be among the global peacemakers who are creating a better world for all.