Ici est mort le marsouin Marcel Amaru – mort pour la paix, a Polynesian from a remnant of France’s colonial empire died for peace, this small text stands on the wall of the Jewish cemetery in Sarajevo, from here a dragunov bullet slashed his throat during the conflict. Heavily shelled and fought for during the war, the Bosnian Serb used as a sniping and artillery position during the war – trenches dug between tombstones – tombstones used as firing positions – mined when the war was nearing its end – an eerie place. 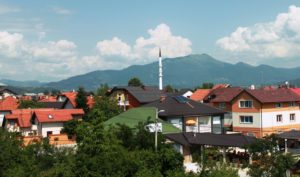 Standing on a hill overlooking some of the main arteries of the Bosnian capital and what journalists looking for a headline named Sniper Alley. Despite an information panel describing it as being rebuilt, the mausoleum I could see only had a handful of reconstructed tombstones. The place is alike the buildings in the city and the country in that it is either miraculously intact, riddled with bullets, or half destroyed by the war and neglected. The cemetery just like the city and the country in the sense it is a mountain and has one steep slope – up the stairs we go – I have an appetite for stairs, the exhilarating effort of overcoming a hill, reaching the top – giving perspective through height, haughtiness now that the world is sizable for the eyes to feast. Buddhist temples would be on high ground, Nirvana reachable through sweat and thighs.

The stairs don’t go far though. Cnce I reach a small platform it’s high wet grass all around – on the platform stands a monument to the Sarajevan victims of the Holocaust. Sarajevo lost almost all its Jewish population during the occupation but the monument has suffered from the war, some of it is visibly reconstructed but shrapnel – the symmetry of absurdity in human violence — impacts its back.

The cemetery has an irrigation system I step into to evade the grass. The tombs are unlike any I have ever seen – oval stones laid face down on the ground, cocoons rising from the earth with name, date of birth and death, golems slowly waking up or mouths shouting the dead’s identity – these tombs are unique in Europe. The Sephardim people escaped Spain in the end of the 15th century once the Catholic Kings erased centuries of cohabitation of Catholic, Muslim and Jewish coexistence – drifting throughout the Mediterranean sea they settled in Bosnia once the Ottomans founded Sarajevo – this cemetery is as old as the city itself.

Halfway through my meandering – the very punctual storm roars its arrival simultaneously with my stomach. This storm has been coming for lunch between 12 and 3 for the last week or so – soon enough the sky cried its soul out and I find refuge under a large weeping willow – a fitting tree for a graveyard goes a morbid thought – protection form the rain but not from a legion of mosquitoes. A quick look at my phone – 12h30 – two hours at least of sitting on someone’s grave unable to read the name of in the company of a few billion bloodsuckers under a willow – weeping and dancing with the rain and wind – time to think I guess.

There is a house to my right – more like two houses scrambled together – the lower half has a smallpox visible across many buildings of the city, spots ranging from 5 to 15 mm and others made of large flowers – bullets and shrapnel. The upper half has been decapitated by a blast and new walls of bricks and concrete have been put together to form a resemblance of a house. Much like the Dayton peace accords roars the morbidity in my head, a few bricks put together called a home without plaster and identity.

The city is riddled with this smallpox, devoured by its past – never forget it is a rallying cry throughout the country, but memory is for books and museums not everyday life. It seems to me like the war stopped yesterday evening and will restart tomorrow morning. Some of that smallpox is visible on opposite side of streets – old front lines and neighbours shooting at each other. During the ethnic cleansing  – another word for genocide – as names are similar between the communities, how did the killers identify their victims? Their neighbours gave them up.

The sky has cried enough for now, the rain stopped and I have a green light all the way to lunch. On my way out I stumble upon a large bone, either human or a dog lives there. Mainly for my sanity I settle on the dog option. Before leaving, I see two graves leaning and supporting each other from crumbling down, two hated neighbours or a Romeo and a Juliet finally together in death, it makes me smile and forget the eeriness, but I settle on a though upon leaving:

When I die burn me, bury my ashes below a willow tree and whenever you see one, sit down, lean on it and watch me dance in the wind.