The role of the ICTY in Bosnia

By Molly Morley and Paul Piffaut

In 1993 the United Nations Security Council resolution 808 set up “an international tribunal with the goal of prosecuting the individuals responsible for violations of humanitarian law committed in the territory of the former Yugoslavia since 1991”. Called the International Criminal Tribunal for Former Yugoslavia (ICTY), this tribunal ultimately created a new standard for future international tribunals, but questions linger on its actual benefits. 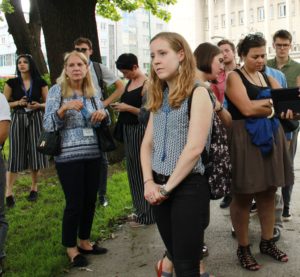 Positives that came out of the ICTY cannot be argued. It was the first international tribunal to truly grapple with and define the scope of genocide. It convicted both Karazic and Modric of crimes against humanity, as well as other senior leaders in the Srpska forces. It also established rape as a war crime and, in certain instances, a crime against humanity.

But for whom did it provide justice? The ICTY did not transform the Bosnian justice system, an external justice system distant from the interested countries that only addressed high-level officials. While the main perpetrators and decision-makers have been convicted, most of the culprits and rank and file involved in conducting those crimes have rejoined society without any form of reparations or punishment. The filmmaker and activist Kemal Pervanic personally confronted one of his torturers who served no punishment for his role as an interrogator in a Srpska camp during the conflict and had returned to his previous job as a schoolteacher. Moreover The ICTY may have exposed some of the worst crimes in the war, but it established no clear path for the education of these crimes towards the Bosnian population it was judging for. Instead, counter narratives have created a persecution complex among much of Bosnia’s Serb population, making reconciliation difficult to address, for example during the last world cup two swiss players of Albanian origin celebrated scoring goals against Serbia in a manner in which a Serbian federation official felt obligated to call the match “a robbery just like the crime tried in the Hague”

The greatest benefit that came out of the ICTY appears to have been absolution of the West’s guilt for inaction throughout the conflict. The West watched as crimes such as the Srebrenica genocide occurred, concentration camps were filmed by channel 4, maintained an arms embargo on Bosnian troops that constrained their ability to defend themselves and Bill Clinton repeatedly lied about the US willingness to stop the war –“I’m getting creamed” he once yelled in the oval office. The international tribunal was able to belatedly bestow justice on some of the worst offenders as a form of contrition, but this justice came years after the conflict had ended and has only partially contributed to reconciliation in Bosnia.

The perception of ICTY as an external justice mechanism hurt its ability to promote reconciliation. Instead, reconciliation must occur on the local level and within political and popular will. Justice, especially international justice, is often imperfect. What is important, and missing from the ICTY, is the presence of individual and communal truth-telling devices that would promote locally-led justice and reconciliation.