A number of these people have been the incredible women that have come to speak to us regarding the each of the sectors that the symposium addressed, from security to reconciliation. 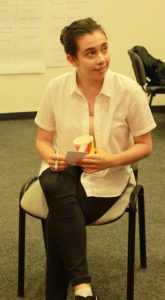 Each woman that spoke to us was incredibly engaging, knowledgeable, and seemed wholeheartedly committed to sharing their expertise with us in order to help us be as effective as possible in our future work.

One of the first of these women was a former Trial Attorney for the ICTY, Carolyn Edgerton. She was able to spend a number of days with us while she was in Sarajevo, first meeting us to lead us on a tour of the city, then later to facilitate sessions on transitional justice models. In addition to this, she was available a number of evenings during dinner, so that all participants had an opportunity to engage with her in smaller groups, and it was at one of these dinners that I was able to have a wonderful discussion about the future of myself and other aspiring peace builders.

All of her sessions were particularly inspiring for myself, as a fellow Canadian, who was excited to hear her perspective. Hearing from her on the fine line between helping in transitions and becoming a burden was something that many of us at the Symposium were able to benefit from, as many of us are active with NGOs or IGOs, and sometimes struggle to find a clear line between supporting local ownership and imposing solutions. At one point she mentioned that wherever she goes, she does her utmost to try to embody our core Canadian values; and her work and energy during her sessions made me proud to be Canadian and to be entering this field.

In the final days of the Symposium, we had the opportunity to discuss the power of Civil Society Organizations with Hind Kabawat, who is a member of the High Negotiation Committee at the Syria Peace Talks, and the Director of Interfaith Peacebuilding Centre for World Religions at George Mason University. Unlike many of the other presenters, she did not begin her lesson with a prop or with a PowerPoint – instead, all of the participants moved our chairs into a circle and she simply spoke to us.

It was the most engaging and interesting presentation of the entire symposium. Hind was incredibly funny, engaging, and every story was told in a way crafted it into a lesson in diplomacy. I had the pleasure of speaking to her when she accompanied us on our trip to Srebrenica, and was delighted to hear that she too has spent a number of years in Canada. She was able to connect with everyone that I saw her speak to in some such way, and as a result, inspired something in all whom she spoke to.

Both of these speakers had a burning desire to help all those that they interacted with, whether the participant was just entering the field, or had been active in it for many years – and this is representative of many of the other speakers and facilitators that we have had the pleasure of engaging during this Symposium. It is the inspiration that I have gained from these people that I will stay with me as a move on in my studies and into my career.