The symbology of ethnic nationalism

During our sessions at the symposium, we talked a lot about the dysfunction of the Bosnian state and how pervasive ethnic identity remains in the society. This wasn’t overly noticeable in Sarajevo, partially because it is the capital and largest city with a cosmopolitan population. However, when our group traveled outside of Sarajevo, we saw proof of how deep these divisions still run. 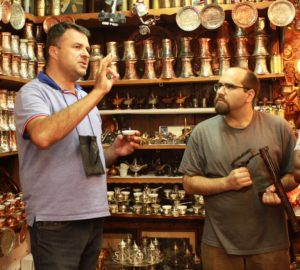 During our trip to Mostar and Kravica, there were more Croatian flags in Herzegovina than Bosnian flags. Additionally, the 108 foot cross on a hill overlooking the city is another cause of community tension between the Muslims and Catholic Bosnians that live in the city. As we drove through majority Croatian towns coming back from Kravica, I noticed graffiti on the sides of buildings glorifying Bosnian Croat general and convicted war criminal Slobodan Praljak.

On the other side of the country, in Republika Srpska, the signs are similar, yet oh-so-different. During our trip to Srebrenica and Potocari we saw more flags of Serbia than of Bosnia, evidence of where the people in those regions feel they belong. Our tour guide pointed out that many of the places where Muslims were killed in the town of Bratunac have now been turned into memorials for Bosnian Serb paramilitary soldiers.

Perhaps I spoke too soon when I said that these symbols weren’t evident in Sarajevo. The memorials on the side of the street to those gunned down by “the aggressor” and buildings that still bear the scars of bullet holes and mortar shells are preserving a different narrative. While the victims of the siege were nearly all civilians, it still keeps the memory fresh in the minds of citizens, even over twenty years after the conflict.

When we talk about ethnic nationalism, symbology is vitally important. Whether you are in Northern Ireland, Lebanon or Bosnia, flags, murals and other symbols help connect people with the historical memory (and often historical revisionism) that maintains their national pride (or hatred of the ‘other’). If we ever hope to move past this dark chapter in Bosnian history, it is important to at least be cognizant of how these narratives still play a role in the daily lives of millions of citizens in Bosnia.