How can our feelings be set in motion to prevent war?

During the Reconciliation session of the Symposium, Dr. Sabina Čehajić-Clancy addressed the importance of rebuilding intergroup relations and trust through emotional processes, rather than cognitive ones, to advance reconciliation. Learning how to regulate negative emotional states, most likely resulting from experiences lived during the conflict, and transforming them into positive emotions, is fundamental for bringing people together and creating a safe space for integral contact. 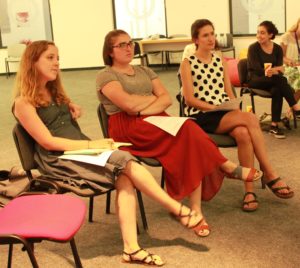 However, prior to engagement in integral contact reconciliation processes, targeted efforts to change people’s perceptions of one another need to be implemented.

The idea of changing people’s perception of war criminals, for example, is one of the most complex challenges and potential spoilers of peace building processes. Interventions looking to address this must work very closely with community leaders, civil society organizations, victim´s associations, psychologists, and others in order to identify a window of opportunity for this type of programming, ensuring a do no harm approach to prevent the re-victimization of conflict survivors. Despite the challenges that this may pose, I strongly believe that changing people’s perceptions of both the survivors and the perpetrators is crucial for successful peace building.

Humanizing perpetrators and empowering survivors as change agents could play a key role in mitigating and reducing the risks of a spike in violence during post-conflict transitions. Colombian war photographer, Chucho Abad, has been documenting the lives of ex-FARC members and their demobilization processes after the signature of the peace accord in 2016. Through his photography, Abad has been able to bring to light untold stories of the people behind one of the oldest guerilla uniforms in Colombia´s internal armed conflict. Although controversial, Abad´s work has had the power to slowly plant a seed in the mind of his audiences that the individuals in his photos, while once members of an internationally recognized terrorist group, are also human beings.

As I think about Abad´s work and other ways that we can work on changing perceptions during transitions, I am infinitely impressed with the courage, strength and deep desire for peace that survivors of conflict must have when deciding to engage in reconciliation initiatives. Although I have not worked with ex-combatants, from Abad´s stories I can only imagine that certain ex-combatants also experience and manifest courage, strength and a deep desire for peace when signing a peace accord and agreeing to demobilize, disarm and reintegrate into society. If the above is true, I can´t help but wonder that if as human beings we are capable of feeling enough courage, strength and desire for peace to engage in something as difficult as reconciliation, how can we set these feelings in motion to effectively prevent war in the first place?