The Military as the Vanguard for Community Trust Building and Security

I’ve been overcome with information and experiences here, so much so that it’s been hard to take account and make sense of it all in order to drill down on one point. This by no means is a criticism. It’s the blessing of both this course and of the wealth of knowledge here in our motley community of participants. The levels and range of experience and the mix of personalities in our group is impressive and what I most love and value about attending global symposiums is that I know my worldview will be altered. It’s critical for me to be constantly challenged, whether personally or professionally. 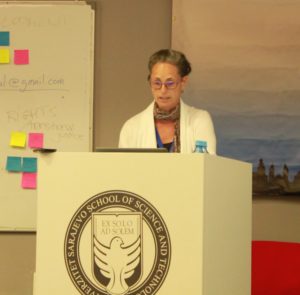 So, I came here hoping to gain more clarity about a few overarching questions, one of which was to understand more precisely how to establish trust with local communities and to navigate program implementation in contexts where a state presence is severely lacking and there’s no confidence in its protection mechanisms. What do you do? Who are the optional actors to engage and how?

Tom Wheelock and Audra Dykman’s presentations definitely addressed the technicalities and theory respecting this question. However, there were two rather heartfelt and pivotal moments that upended my previously held notions. The first occurred during our visit to Peace Support Operations Training Centre as LTC Fariz Fadzan spoke. The second occurred during a conversation I had with one of “our own”, Mucyo Mulinzi. These two men changed my understanding of how valuable and trustworthy the military could be as the vanguard of community trust building, that is not just playing an assisting role but acting as the trusted actor.

In Mucyo’s case, he described some of the personal sacrifices his troops made to ensure a community project was carried out. He said with great passion and certitude that “we need to be a voice for the voiceless”. This type of statement is often heard from a human rights leader or a civil society organization. Yet this came from deep within the heart of a man who represents Rwanda’s military. I have friends in the military of varying rank and that’s not a statement I readily hear. It’s also something I wouldn’t have ever imagined before. Yet, Mucyo’s and LTC Fadzan’s remarks and work made it clear a viable and effective opportunity exists in the military led operations that exhibit great heart and compassion.

I think about the Colombian context. I attended a woman and security symposium earlier this year in Bogota, Colombia where the National Police and Armed Forces were in the same room as human rights leaders, women from conflicted-affected areas, human right leaders and lawyers, etc. It’s also not the mix of personalities that you would typically convene in the same room. For very good reason, trust between all armed actors and conflict-affected communities is very frayed. Yet, at the end of the symposium, there were challenging conversations between State forces and women in affected zones that broached very sensitive and difficult subjects. For that moment, at least, there was an aperture and a certain degree of will to consider a new way forward.

Two pertinent points stand out in all of this:

1) In this work, part of the ongoing practice is to constantly reflect upon my worldview, recognizing that I – and no one else – constructs it with limitations. I simply cannot know everything. Admittedly, I sometimes act as if I do. It’s one my greatest weakness and a point I have to constantly call myself out on. Therefore, in this work, it’s critical for me to continually engage with others (especially over food) and to remain open in order to see and hear others in order to accept other realities I would’ve previously considered untenable. We’ve been reminded that innovation is critical in our work. I’m reminded here that others already have outstanding answers in play.

2) Yesterday, our tour guide Muki, a military man who has also experienced the “deep dark” of war said “Nationalism is the cheapest form of acquiring power and there are enough sheep out there stupid enough to follow them.” It yet again sent home the message of how critical it is to take extreme care in who we choose for any given leadership position in order to make real these seemingly impossible inroads. That is, to choose representatives that have the courage, emotional awareness, and intelligence to move all of us beyond our basic instincts to a higher moral ground for the good of us all.