One of the main reasons that I applied to the IPSI symposium on post-conflict transitions in Sarajevo was because I wanted to learn more on how the process of bringing a people group from a state of war to a state of peace is accomplished. More precisely, I wanted to learn what, if anything, could be done during the conflict to make the transition to peace more feasible. 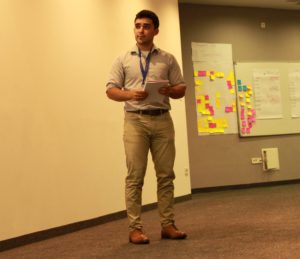 I come from a military family, and I myself plan on joining the Canadian Armed Forces. I wanted to learn about post-conflict transitions so that I can apply what I learned at this symposium to my job, seeing as I may very well be involved in a conflict situation someday. Today, I found my answer. The whole group traveled to the town of Srebrenica today. We went to learn about the genocide and other atrocities that occurred not all that long ago. It was a difficult day for many of the students; however, I think it is safe to say that we were all glad that we made the journey to learn about the terrible things that happened. While we were being toured around the area, I couldn’t help but think that there must have been something that could’ve been done to avoid the awful things that happened right where I was standing. I understand that war is oftentimes inevitable and unavoidable. Wars start in the blink of an eye, before any real force of conflict deterrence can be organized. Having said that, I still believe that there is a way to stop or at least limit the damage that occurs during the war. I firmly believe that the international community and all actors involved have no excuse when it comes to the occurrence of genocides. Genocides are usually predictable. Srebrenica was no exception. UNPROFOR had a presence in Srebrenica when the perpetrators of the genocide committed the horrible acts. So what went wrong? How is it that one of the worst atrocities of the war took place in a UN protected area? I did a lot of thinking about this on the bus ride back to Sarajevo, and I came to a conclusion. I believe that it might have something to do with the fact that soldiers are trained to fight, not keep peace. In my opinion, being a soldier and being a peacekeeper are two distinct and separate occupations. You wouldn’t send a barber to build a house, nor would you send a butcher to bake a cake. In the same way, I believe that you shouldn’t send a professional warrior to bring peace to an area. The world could benefit from a specialized peacekeeping force. A group of individuals who are highly trained and specialized in peacekeeping tactics, theory and practice. They could be involved before, during and after a conflict in order to oversee and aid in the peace process. The peacekeepers in Srebrenica were ineffective to establishing peace, and this all came down to a lack of training, organization and ideology. I believe that if a more highly trained and organized group were to be in that position, the likelihood of seeing the same results as Srebrenica is reduced. Perhaps this idea of mine is something that I will pursue as my career progresses. All I know for now is that I have gained a new perspective on the practicality of peacekeeping and what it means to be a warrior for peace.