As we discussed what constitutes ‘crimes against humanity’ during a lecture by Carolyn Edgerton on transitional justice, I reflected on my knowledge of the situation in Qatar in preparation for the next FIFA World Cup in 2022. 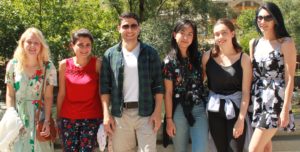 Many of the laborers working on construction of the new stadium and nearby roads, hotels, and other infrastructure are recruited from foreign countries, largely from South and Southeast Asian countries such as Bangladesh, India, and Nepal.

Many migrant workers are lured there with the promise of financial gain, an alternative to the poverty and unemployment often found in their own country, but arrive in Qatar only to find that they have essentially been turned into forced laborers. The worker’s pay recruitment fees to the recruiters in their own country to cover their transportation and accommodations, and then are promised to reap the pay of their work many times with the intent to have it sent back to their family. Upon their arrival, the migrant workers passports and identity documents are confiscated, their wages are often withheld for months at a time or they are given much less than they were promised. Additionally, their living conditions are dirty, unsafe, and generally overcrowded, and many sources estimate that by the end of construction in 2022 around 4,000 migrant workers will have died between extensive hours laboring in the hot weather, falling ill from unsanitary conditions, and falls from the worksites with improper safety measures. Much of the international community is aware of this, and from a legal perspective it seems to easily constitute crimes against humanity, however it is still being allowed to continue. We have not yet reached the estimated 4,000 deaths, and I question with all that therein to gain financially, if in the next four years anything besides the shaming from international organizations will be done. It is an interesting and unfortunate phenomenon how selective the international community is in getting involved in scenarios which constitute international crimes. I strongly hope, but with little optimism, that the world will not see condemning and acting on this, as a situation where there is too much to lose by doing so, but only time will determine this.