Truth, Healing, and Community Building: A Case for Reconciliation in Bosnia and Herzegovina (BiH)

I consider one of the most critical and detrimental factors that has stalled a nationwide process of truth-telling, healing and community building for the Bosnia and Herzegovinian society, is the lack of a Truth and Reconciliation Commission as part of the Dayton Accords. 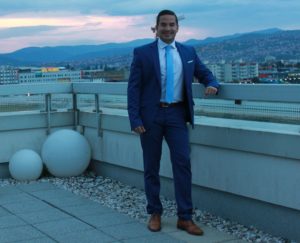 At the Symposium I have learned that such a transitional justice instrument, is an essential first step to define and facilitate nationwide consensus regarding the wrongdoing (i.e. human rights violations, terrorism, crimes) that took place during the conflict from 1992-1995.

The discussions facilitated by the speakers, attendance to Srebrenica cemetery and other sites and speaking with locals has brought to my attention that there has been no strong interest or efforts by the Bosnia and Herzegovina (BiH) government to investigate such wrongdoing and initiate the truth telling, healing and community building process. A major theme that surfaced from these conversations and that will affect this peace is the Republic of Serbia’s (RS) denial of the genocide, which has had a significant influence on the BiH ethnic communities especially that of the Bosnian-Serbian community in denying, belittling the role and actions of the RS in the conflict.

Despite there being ample evidence and having major players of the genocide such as Radovan Karadžić being sentenced and held accountable for crimes committed, there continues to be entrenched ethno-religious divisions in BiH that spoil the reconciliation process. An example of this is how the Bosnian-Serbian community in Srebrenica do not support and in fact undermine the claims of the genocide in this town. When you are in Srebrenica there is a definitive and strong nationalistic presence of the Bosnian-Serbian community, evidently expressed with Serbian flags throughout multiple homes, businesses and venues. In addition, it is tragic and demoralizing for any victim of this community to see that jointly witnesses and perpetrators of the community neglect and underplay such a catastrophic event, to the extent that claims have been made that some of the bones in the graves at Srebrenica are those of animals and not human beings.

Without the political will of the BiH government to institute a Truth and Reconciliation Commission or governing body that will educate the BiH society of the wrongdoing that took place during the conflict, the crimes may be repeated. The international community’s lack of pressure in pressing for change to this regard speaks volumes of their interests, or lack thereof. Without a governing body there seems to be only a slight hope for a successful reconciliation process. Ethno-religious divisions will continue to perpetuate and persevere in an already highly volatile community where the social fabric and cohesion weakens with time and is subject to government manipulation.