The weakness of the perpetrator

I stood in front of everyone introducing a guest during the Sarajevo Symposium on Post Conflict Transition. He is a known survivor of the notorious Omarska concentration camp during the war of Bosnia and Herzegovina in 1992. I read his bio, and surfed the internet to collect necessary data about him. I was supposed to chat with him during the lunch break before his talk to ask him few more questions, but I simply couldn’t! I was ashamed of my humanity! I felt overwhelmed with guilt, I couldn’t approach him! 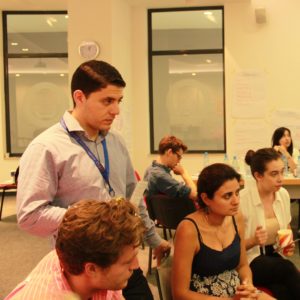 I briefed the audience about our guest, then left the stage. I was walking away and wishing him best luck reliving the story of his suffering.

He stood on the stage, folding his arms, slightly bending his back and spoke with a very low quiet voice. During his detain in the camp, he was starved, humiliated and interrogated by someone who once used to be his school teacher. Every line of his speech is a chilling, frightening and scary story. Every part of it, I was praying all the time, ‘please don’t get worse’.

Luckily for him he managed to survive. Years after that, he decided to go and confront that teacher. He stood in front of him and asked him WHY? The teacher dwarfed in front of his courage, sought excuses from cultural, political and contextual reasons. The victim was standing there, with the power in his hands, and the perpetrator with the burden on his shoulders! The victim was way more powerful than his former jailor.

Ten months ago, I was leaving Gaza Strip to pursue my graduate studies in the US. After a hundred days of coordination, the Israeli army allowed me to travel on the condition of sitting for a security interrogation. On that day, the intelligence officer walked into the room, asked few random questions and in an attempt to unsettle me, he showed me photos of my dead friends. I flipped through them, naming them one by one, remembering how we grew up together, how we ate and drank with each other. I miss them, I miss all of them. I admitted to the officer that I knew them all! He then asked me about other alive ones, I replied that I don’t know them and all of my friends are dead! He said, “what does it tell about you when all of your friends are people who were killed during military operations?” I immediately said, “Not worse than it says about you! Look at your uniform, you work for the army that killed them!” The officer stuttered and fumbled trying to moralize his work. I had no answer. He ended up apologizing to me!

Today and tomorrow and the day after tomorrow, I will still miss the people I grew up with. I still remember their faces, their favorite food and their silly jokes. My life will never be the same without them. However, I treasure the memories I had with them. I smile when I think of them. Meeting that brave survivor of the Omarska concentration camp showed me how weak, fragile and burdened a perpetrator may become after committing his crime. If I want to raise awareness about conflict and violence, I want to travel around to every conflict zones and tell the young fighters that hurting someone will make them suffer for the rest of their lives!