As the 2018 IPSI Symposium on Post Conflict Transitions nears an end, it is a time to reflect upon the many lessons learned. For myself these lessons surround techniques for assisting in post conflict transitions and the benefits of having a wide-ranging pool of talented people to work with. 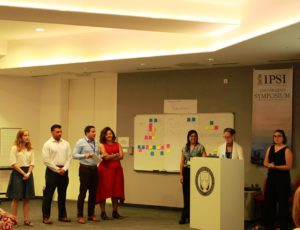 The most profound lesson regarding post conflict transitions is that there is no simple solution, historic case studies of successes and failures only illuminate different approaches and lessons learned.

But to address the true root causes of what started an armed conflict will most likely be seeded in deep cultural issues that have long histories. As an outsider looking in, it will be important to be realistic about the goals one wishes to accomplish. Much like a military operation the first step is always collecting intelligence on the problem set. It is important to know all the key players such as the parties at odds with one another, government officials and external actors. However, it is equally important to spend just as much effort getting to know the civil society aspects associated within the context of the conflict. This has been one of the most beneficial lessons learned for me during this symposium. As a military member most of my work in conflict zones revolves around working with government actors and agencies. Given the nature of what 21st century warfare is turning out to be, it is an increasingly gray space, filled with non-state actors and at times numerous nation states picking different sides, making conflicts increasingly difficult to end. Unfortunately, as there are no clearly drawn battle lines civilian populations are more often than not caught in the middle of multiple warring sides. Learning of the strength of grassroots movements, NGOs and civil society was interesting. In most of the scenarios studied during the symposium it was the civil society that has the most flexibility to cross lines between parties and mediate. While warring factions more often than not will not interact with one another aside from the battlefield. Civil society is often a representation of the population as a whole. The case of Bosnia is a perfect example of this concept as there where Croatian, Bosnian and Serb armies warring with one another, in many ways the impacted civilian centers had members of all these ethnic groups not only living peacefully together but helping one another to survive. Even entering 23 years since hostilities ended, while the politics remain deeply divided within Bosnia amongst the different ethnic groups, many within civil society tell a very different story. They tell a story of people just being people and wanting a peaceful existence together. As a military member I see civil society becoming an increasingly more important sector of what 21st century conflicts are emerging to be. Particularly because the world looks like a different place since the end of World War II. Societies are not as purely ethnic as they once were, immigration and migration have altered the make-up of many societies. More and more countries around the world are increasingly becoming melting pots of many different ethnicities and cultures. Given this observation it is evident that the best tool to assist peacebuilders to understanding the “ground truth” is to assess what the various aspects of civil society think the root cause problems are. The second lesson for me emerging from the symposium is the importance of having a broad team, talented and educated in many different disciplines. This year’s symposium drew in 25 participants consisting of students, academics, peace building practitioners, and military members from 13 different countries . Each individual has a specific lens in which they viewed a problem set and possessed unique experiences to help in developing unique courses of action. When this diverse group of individuals came together as a team to develop creative solutions to problems, the outcomes where nothing short of impressive. This experience has only further deepened my belief that there is no monopoly on good ideas and the importance of incorporating professionals from multiple fields will remain important in this line of work. We all leave here with a broadened network of friends and professionals, I feel confident that all these people will go forth and do good things in the world. And if they need my help all they need to do is reach out, it would be an honor to work with anyone of my fellow participants in the future. Thank you all, I have learned so much.