A Tale of Many Interests 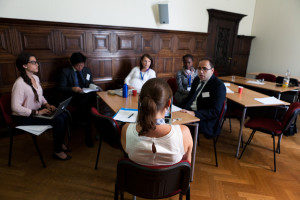 The IPSI simulation for a peaceful transition in Beladusham reminds me of Dickens’ timeless line. We arrived to The Hague Symposium with the belief that we are peacekeepers and that we are willing to dedicate time and effort to improve the lives of those suffering. However, things evolved as soon as the simulation began to imitate circumstances in the real world. All the IPSI participants were assigned different roles of distinct actors, each one with a background, an agenda, interests, allies, and enemies. This seemed to replicate reality in a striking way. We read the description of our roles and little by little began to identify with our characters.

Suddenly, without realization, we ceased to be peacekeepers that were genuinely concerned with the well being of the people of Beladusham. Even though we were doing our best to protect our country’s interest, we completely lost sight of those we were there to assist, the neglected Beladushami people. It is this day, the first day of the simulation that I ask myself once again what a real international negotiation entails. “Diplomacy” sounds like a beautiful word, but it seems that we often stand in a war of conflicting interests that are covered by a disguise of moral principles.