In the Midst of Chaos 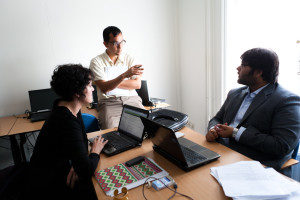 Leaving personalities out of negotiations is what yields constructive results. But that remains a major flaw in the concept of international conflict resolution, the existence of a plethora of interests. Yesterday began yet another attempt to find a solution, this time to the situation in Beladusham, a country so close to Syria, yet so far. A strife, so acutely complex that finding a solution to it is like saying that impossible is probable. A three day simulation commences today where a polarized UNSC, raging groups of rebels, a divided government and helpless ICC, all come together to shape the future of a country in turmoil. The biggest challenge, also the biggest learning experience, is to fit into a role which is so distant from your sensibilities and to stay in that role through the course. A Kenyan French Ambassador, an Australian American, a Russian Beladushami President & a Syrian Qatari, all fighting cultural identities at each stage while still having to prevent these privy perceptions from cloaking their objective, allocated roles.

Intense lobbying amongst groups began early in the morning while official conferences began later wherein a variety of agendas were deliberated by the different stakeholders in the conflict. The Opposition, divided in ideology but united in strategy; the UNSC, exercising the power that accompanies the stature of the forum; the NATO, building upon the plausibility of a restructuring intervention; the Government fragmented on personal issues and the Arab League & other representatives trying to establish their role in the conflict, just somehow. In the midst of all this chaos, sat the International Criminal Court, doing what it does best, being optimistic.

Multiple rounds of negotiations continued from early in the morning to late at night, some bonds forged, some broken but all of this accompanied with a lot of drama. When a group of enthusiastic, peace loving, optimistic and diverse individuals decide to sit together and come to a conclusion, there’s only one major hurdle on the road to finality: themselves. Having said that, we can look forward to an intriguing round of negotiations during the Geneva talks, when a consolidated effort from all interested parties shall be made to eventually end this well intentioned venture into a passionately argued stalemate. Well, while maintaining the cynicism on this extremely ambitious endeavor, I can do only one thing from the outside: PRAY.

May the force be with you!