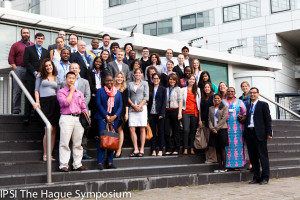 The fourth day of the symposium began with a field trip at the International Criminal Court (ICC). The purpose of the trip was to learn more about the ICC and it’s work in a more concrete and realistic manner. The trip was immensely educationnal , challenging and fascinating. I learned so much that, by the end of the trip, I was sure  many of us had decided to join that institution.

We found a surprisingly humble building, but later learned that the current building is  an interim premises. Scheduled to open in 2015, the permanent premises designed  by a Danish architectural firm will be located at Alexanderkazerne (Alexander  Barracks), which will be closer to the detention center and be part of  the International  Zone of the Hague.

We began with a tour of the renovated car park (in which the ICC is housed!), and were fortunate to visit one of the courtrooms. Sitting behind bulletproof glass, we  were surprised to be situated only metres from where the witness would be sitting  during a trial. Speaking to the group, Kathryn Finley, Assistant Legal Officier traced the history of  the instiution which is the first permanent, treaty based, international criminal court  established to help end impunity for the perpetrators of serious crimes of concern  to the international community, namely genocide, war crimes, and crimes against  humanity. The ICC is an independent international organization headquartered  in The Hague in the Netherlands. The court was established on July 17, 1998 by  the Rome Statute, the treaty and legal basis for establishing the permanent court.

Currently, 122 countries support the ICC. The ICC has also been established as a  court of last resort, and will only act if a national judicial system refuses to investigate  or prosecute a particular case. Anticipating the question about the fact that the court is simply working in Africa andnot taking on cases outside, she said that there are also preliminary examinations  of situations in Georgia and Afghanistan. The ICC were  analysing situations from  around the world, and conducting investigations into many countries. However  we  have to keep in mind that the ultimate goal is not to try to have a balance of cases  from around the world – but just to do what is necessary and investigate the worst  crimes. Some of the worst crimes right now are happening in Africa, and that is  why the ICC has so many cases in Africa. It has nothing to do with striving towards  balance, but it’s about pursuing justice where it is most necessary.

Finally, Antonia Pereira de Sousa, Associate Cooperation Officer then taught us about the OTP, Office of the Prosecutor. There is a joint team of 300 persons divided into three sub-offices : the Investigation division, the prosecution division and the juridiction, complementarity and cooperation division. The OTP is guided by three  principles: independance, objectivity and complementarity.

To be honest, before this trip to the ICC, I was actually a bit more critical of the Court’s policies. This trip helped me understand what the Court is all about, and  helped me think more grandly. Although there are numerous problems to be solved  in the short-run, and the Court is still so young – this trip opened my eyes to the  immense potential the ICC has to help alleviate some of the world’s most complex  conflicts in the long-run. I felt incredibly lucky and privileged to be able to go to the Hague and observed  firsthand my interest in transitional justice, especially in light of all the exciting new  developments taking place at the ICC and now I understand better it’s goals.

« Understanding the situation » : The afternoon was devoted to  Establishing  Security  in  transition, 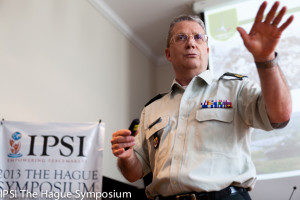 developed  by Lt. General Ton Van Loon, Corps Commander, 1st German/Dutch Corps, Former Commander, International Security Assistance. He emphasized on the dilemmas that arise in this type of situation. As he said, there is no single model of intervention for different contexts. The first thing to do is to understand the situation and the accountability in context, because as he said,  without accountability, we become wolves, predators. Going through a simulation, we analyzed the difficulties faced by a UN mission in a country in transition. We developed several scenarios that could happen in a complex and uncomfortable environment.

From the “security” symbolized by the ICC to the “insecurity” on the ground, leaders must constantly bear in mind the dynamics and complexity of their mission.