If All You Have is a Hammer, Everything Looks Like a Nail

It was a privilege to receive wisdom and perspective from Dr Dov Jacobs on Wednesday. The primary 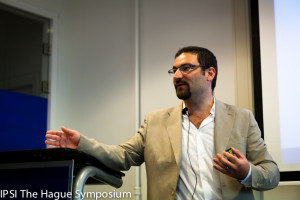 focus of our lesson was the elements and mechanisms to achieving justice. The IPSI participants were introduced to the fundamentals of retributive and restorative justice and were led through the theory of the ICC’s jurisdictional reach and functions. Coming from a legal background and having the foundations of International Criminal Law under my belt, Dr Jacobs served a refresher course and even opened my eyes to more theoretical and philosophical questions of whether truth exists and, if it does, why it matters. The instigating question hanging on my mind was whether justice could even be described as a state at which people arrive, post-conflict, with the assistance of the law.

The imperative notion that Dr Jacobs expressed was that there is a general problem of selectivity in International Law. Some people seek legal mechanisms to expose truth, exercise revenge or achieve peace through some cathartic process. Whatever purpose the law serves for people, it is essential to question what benchmark ought to be used to evaluate the effectiveness, success and applicability of the law. Post-conflict states are not in a position of calm after a storm. Rather, these states are in dire need of attention and sensitivity.

While this may seem like basic truisms, it remains valuable to bear these thoughts in mind as it becomes apparent that not all goals and intentions for repair, restoration and justice can be achieved simultaneously or equally. I personally viewed this as an important lesson from Dr Jacobs. From a holistic view, hierarchies are undesirable but without prioritizing and possibly implementing evaluation tests for the functions and consequences of mechanisms of justice, victims do not stand a significant chance at achieving justice at all. The day left me with the profound thought that Law won’t produce the answer and even as a tool to achieve the elusive level of justice that people seek and/or deserve, hammering every little issue, every little nail in the massive construction site that is international criminal law and post-conflict transitioning is an inefficient and exasperating exercise. Ultimately this full throttle start into the program has invigorated my enthusiasm in the international peace-building pursuits of IPSI.