Mapping the Framework for Holistic Transitions 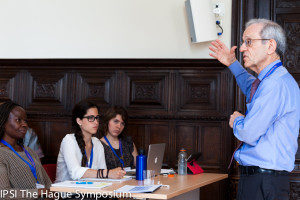 From Australia to Cameroon, India to the United States, we gathered  yesterday with much anticipation for the first lecture of what has been defined as “an intense but fun & fulfilling” month at the Hague Symposium. Drawn together by diverse interests in Post Conflict Transitions & International Justice, scholars, practitioners, government representatives as well as policy makers gathered at the Clingendael Institute of Foreign Affairs. Our session was centered on Mapping the Framework for Holistic Transitions. The days lecture was run by Dr. Daniel Serwer, who has had a well-established diplomatic career and is currently a senior research professor and senior fellow at the centre for transatlantic relations at the Johns Hopkins School of Advanced International Studies.

Dr. Serwer allowed our brains to wander through the sea of conflict/post-conflict situations while examining the Framework model. An im
portant highlight in our day was the mention that within the current Framework, the notion of a justice system does not take into account tribal systems of justice, which are increasingly being considered in post war reconstruction efforts. The session also included a mini simulation of segments of the Syrian situation taking into account the regime and opposition demands and intended actions on various elements of the Framework. All in all, the day left a lot to ponder. An incredible way to start the symposium!