Validity of the Court 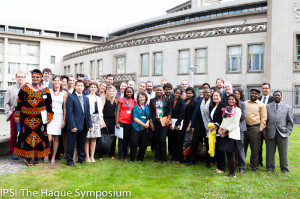 My partner recently said that The Hague is like ‘Disney Land for lawyers’, and if that’s true then the International Criminal Tribunal for the Former Yugoslavia is surely one of its most fascinating ‘rides’. The timing of our visit could not have been better. William Stuebner’s presentation had given us all a lot to think about, and the chance to see the court in action, as the Radovan Karadzic case progresses, was incredibly exciting.

Matthew Gillett, a trial attorney with the Office of the Prosecutor, first gave us a brief overview of the creation and workings of the court. The ICTY was created by UN Security Council Resolution 827, at perhaps the height of the conflict in 1993. It was the first international criminal tribunal established since the Nuremberg and Tokyo tribunals, provoked by international outrage at the atrocities of the war. Matthew reminded us that because the tribunal was established by the Security Council, rather than the ‘opt in’ treaty system that founded the ICC, it possesses far more power to compel state cooperation. It has jurisdiction over 4 groups of crimes committed in the former Yugoslavia since 1991: grave breaches of the Geneva Convention, crimes against humanity, violations of the laws or customs of law, and genocide. It has indicted 161 former leaders, commanders and soldier, 68% of the indictees being Serbian.

Mathew’s presentation reminded us of the structure and mandate of the court, as well as giving us the chance to ask some of the questions that Mr Stuebner’s presentation had raised. Questions were asked about the difficult task for gathering evidence for the prosecution. This job is not only complicated by ongoing conflict and logistical complexities, but also the sheer scale of the job. How do you approach this task when the crimes in question were committed years before, and what evidence do you gather when the accused usually did not personally carried out the killings? Matthew’s answer summed up many of the complexities of prosecution of such crimes; ‘the scale contorts the whole way you carry out the litigation.’

Before we entered the ICTY, some of us had been joking about how Radovan Karadzic might appear in court. Given the horrific nature of the crimes he is accused of, we joked perhaps he would have horns and a tail, two heads, and appear in court out of a cloud of black smoke. But as we entered the visitors’ gallery, there he sat, an entirely ordinary looking man in his 60’s. Perhaps that’s the greatest horror, that evil is not easily identifiable, and despite the horrific acts Karadzic is accused of, he is just a man.

When we entered the gallery, the session was closed for a short time, as the judges and advocates argued an issue deemed unsuitable for the public. However were in luck, shortly the session was reopened to the public, and the show continued. The proceedings themselves were not unlike many of the domestic court sessions I have watched in Australia; the flurry of robes, prosecution questioning, judges huddling to decide on matters of legal technicality. There were the usual banalities of every court proceeding; small objections, technical difficulties, problems with translation. Legal nerd that I am, I was completely transfixed, particularly watching Karadzic’s examination of the witness. I noted that, unlike counsel for the prosecution, Karadzic did not stand whilst examining the witness. I was aware that he had, after his arrest, refused to cooperate fully with the court, and I wondered if this was some kind of small protest against the validity of the court.

A lot of controversy surrounds the work of the ICTY. Questions as to its legitimacy, efficiency, and ability to truly administer justice for victims were all raised by William Stuebner, and are important questions to ask. But despite this, its role as step in the evolution of international criminal law is undeniable, and important to recognise. I stayed until the court adjourned for lunch. Watching Karadzic talking with his legal support, and the security guard in the background waiting to take him down to the holding cells, I felt a small sense of pride that, whatever the systems failings, there was at least someone calling him, and those like him, to account.