A Wealth of Knowledge

The 2013 Hague Symposium has been a great experience so far, and there has been a wealth 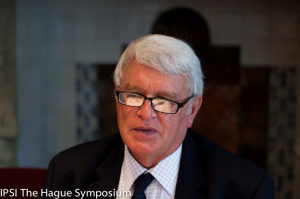 of knowledgeable speakers who have lectured for us. Today’s speaker was former Special Advisor to the Prosecutor at the ICTY (International Criminal Tribunal for the Former Yugoslavia) William “Bill” Stuebner. Mr. Stuebner offered a balanced history of the conflict in Bosnia and Herzegovina, where he had worked with USAID during the conflict. Stuebner offered intelligent insight and a human dimension to his historical narrative, often mentioning his encounters and assessments with local highranking officials or stories involving friends and family in the area. By the time he reached the end of his historical account, I think we were all better informed and more discouraged about the state of the region. In our first lecture, Mr. Stuebner asked the class for their definition of a nation. His definition of a nation (an apt definition for his region of expertise) was that “a nation is a group of people united by a common mistake about their history and a common dislike of their neighbours”.

After serving in Central America (specifically El Salvador) with the US Military, and in Bosnia with USAID, Stuebner was later tapped to help form the International Criminal Tribunal for the Former Yugoslavia. Working in the Office of the Prosecutor, he brought interpreters from Bosnia to The Hague to work at the Tribunal, as well as helping complete field investigations for ICTY cases. He offered us a glimpse into not only the inner workings of the Tribunal, as well as his opinions on the prosecution’s senior leadership, including Richard Goldstone, Louise Arbour, and Carla del Ponte. He mentioned that the original prosecution staff was 23 people, and that due to the need to fill geographic quota requirements, the Tribunal often did not get the most competent and skilled staff to help fulfill their mandate.

While Stuebner was a supporter of the work he did while at the ICTY, he did not hesitate to offer pointed criticisms of the institution. First of all, outreach to the victims and the communities involved was an issue. Instead of effectively meeting the needs of the communities in the region he argues, “We ended up servicing the international community and the donor countries”. Accusations of bias were exacerbated by the fact that prosecution teams were set up on ethnic identifiers, rather than geographic boundaries, as he had suggested at the time. This was further complicated by the fact that rival prosecution teams did very little communication with one another, as “one team’s victim is another person’s perpetrator”. One of his largest complaints, however, was the lack of a comprehensive Truth Commission to tell the story of what happened. He recounts that they were able to sell the plan to all of the political parties in the country, but it was ironically Louise Arbour who shot down the process, eventually leading to it not being adopted. It was with disappointment that he told us “Serbs and Croats have never found the Tribunal legitimate” and in his most recent interviews in the area, most Bosniaks (Bosnian Muslims) now feel the same way.

To finish the day, Mr. Stuebner gave us an update on the current dynamics in the country, which caused us some discouragement. The Patriotic League, a paramilitary group which had protected Sarajevo during the War, is beginning to re-form, and is extremely cautious of the actions of Bosnia’s neighbours. They even told Stuebner of a plan to assassinate Milorad Dodik, leader of the Serb-dominated Republika Srpska, which he was thankfully able to talk them out of doing. He mentioned that there were Bosniak forces fighting in Syria, under the notorious al-Nusra Front, suggesting that these men left radicalized, only growing more radical while fighting in Syria, so if they were to return, they would no doubt be an issue. With an unemployment rate near 48%, skyrocketing to 70% among military-aged men, this lays the foundation for what he dubbed “The Sleeping Dragon” to awaken. This is primarily why he is now highly involved in organizations that bring together all of the ethnic groups on issues such as youth involvement in municipal politics, the rights of veterans, and peasant farmers.

Mr. Stuebner’s lecture today was fascinating, and gave us a great deal of information for our trip to the ICTY tomorrow. “Be sure to ask the Prosecutors tough questions” he told us, “but remember to read UN Resolution 827, so you are aware of the mandate of the court”. In personal conversations he was very willing to share advice and offer encouragement in our future endeavours. One thing he mentioned to us was that “it’s all about the journey” and suggested that people get out into the field and experience things practically. In all, I was extremely impressed by his lectures.