Learning from the Field 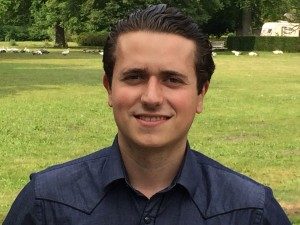 It is sometimes stated that the 20th century, which brought us the First and Second World Wars as well as the Cold War, was the century of conflicts, while the 21st century will be remembered as the contrasting century of peace. With respect for diverging opinions, it sadly appears clear to me that such a position reveals itself to be impossible to uphold as of now, especially after meeting Lieutenant General Ton van Loon, former commander of NATO’s International Security Armed Forces, Regional Command South in Southern Afghanistan, and former commander of the 1st German/Netherlands Corps in Münster, Germany, who was accompanied by his legal adviser, Major Machteld Bots-Bottinga.

A priceless source of exclusive knowledge and captivating yet often very dark experiences, listening to yesterday’s speaker at the IPSI Hague 2014 Symposium was as enriching as it was a pleasure for all participants.

This is particularly true considering how this session was the first opportunity for participants to adopt a military perspective on the post-conflict transitions and justice topics for which we traveled hundreds, if not thousands, of miles to study. In response to the numerous current international conflicts, our guest shared with us his vision of an unpredictable and unsafe world, before asserting that the idea of stability, for instance economic stability, should be enough for developed countries to have an interest in helping those demanding peace.

Having been deployed in Kosovo and South Afghanistan previous to his days in Germany, it was no secret that Lt. General van Loon 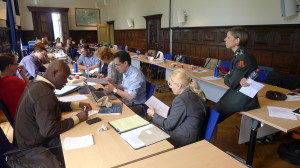 had an accurate point of view of what war really consist of, which we were able to seize by identifying some crucial realities of the military take on such conflicts. First, we tackled the notion of multi-nationality, portrayed to us as the rule, not the exception. Simply ignoring this conception being unthinkable, it was explained to us that each military mission requires more than one nation for any success to be achieved, while we however need to grasp the fact that the more countries are involved, the more time and efforts will be necessary for any decision making process. Giving preponderancy to a precise and strong communication in any military collaboration, our speaker made clear that national secrets had, in his opinion, to be moderated, cooperation being far more important.

Second reality mentioned by our speaker, the difficult identification process of the enemy, and of his resources, objectives and options, revealed itself to be a very equivocal task. Under what conditions do we recognize someone as an enemy? Who are his allies? Who are his rivals? By their nature, these few questions can relate to our third reality, the complexity of the conflicts in which military missions are involved. 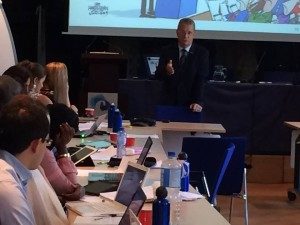 To fully comprehend this idea of complexity, it is fundamental to be conscious of the fact that everything that happens in a conflict has an effect on the rest of its various components. Lt. General van Loon mentioned here a bowl of spaghetti, symbolizing how intertwined every single element is with each other. In such a context, the idea of having to establish a priority as a military actor can only appear to be a very intricate and uneasy task. This being said, the Lt. General was still able to identify the building of police capacity as the number one priority in many cases, according to the numerous experiences he faced. Adding to the complexity of any military activity are, to name only a few of the factors touched, the concerned government’s capacity, the necessity of adopting a comprehensive approach when intervening, the discernment of what does the people really need and the fact that every environment is different in terms of politics, security, economy, etc. Remembering that what works somewhere may not necessarily work somewhere else is key here.

After having the chance to listen and discuss with Lt. General van Loon, it is with a better understanding of the thinking process that must go behind every single military intervention, as well as with a better comprehension of the many challenges that soldiers and their superiors must face constantly, that I can affirm that it was an absolute privilege and enjoyment to learn from such a prominent expert on the topic. Once again, IPSI was successful at delivering a stimulating and substantial session to its participants.