It is one thing to sit in a classroom for weeks, months – years even, and learn about concepts such as 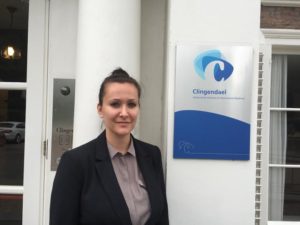 “restorative and retributive justice”, “frameworks”, and “alternatives to state building”…It is another to combine this knowledge with hands on practicums and visit institutions where these concepts are applied.

The week started with spending the day with Julie Fraser and Professor Tom Zwart. During these sessions we examined and discussed the concepts of “restorative and retributive justice” through discussion and two film screenings. “The Court”; a film which follows Luis Moreno Ocampo, the first Chief Prosecutor at the International Criminal Court (ICC); highlights various challenges he and his colleagues face at the ICC in the pursuit and prosecution of war criminals.

The second documentary we viewed focused on the civilian impact of international justice and the efforts of reconciliation. “Beyond Right & Wrong: Stories of Justice and Forgiveness”, narrates the journey of groups from three different conflicts: Israel-Palestine, Northern Ireland, and Rwanda, all who are survivors of conflict and are trying to work towards reconciliation and forgiveness, however they define that process. The film addressed these questions: “How do whole societies recover from devastating conflict? Can survivors live converse, smile, and even laugh beside someone who blinded them, killed their parents, or murdered their children? Can victims and perpetrators work together to rebuild their lives?” There are no concrete answers to these questions, but it is very helpful to witness the possibility and progress through these peoples’ experiences.

Later we moved to examine the current tension between the ICC and the African Union (AU) by examining this question: “Is the deterioration of the relationship between the ICC and the AU a result of power politics or neocolonialism?’’ This, of course, is a very contentious question, but still an important one to examine in an academic setting. The question of a bias against Africa is extremely controversial with both sides firmly affirming the validity of their perspective.

We discussed many non-disputable facts that contribute to the idea that the ICC is not targeting the African states: almost a third of ICC member states are African; five Heads of State have requested ICC intervention; and several of the senior positions within the ICC are held by Africans, including the ICC Prosecutor Fatou Bensouda. We also discussed how the 1998 Rome Statute proves obtaining jurisdiction to investigate and prosecute is difficult to obtain, especially if a member state is not party to the Rome Statute.

On the contrary, the idea was raised that the ICC was “created in a colonial framework”. For instance, the Revised Coutonou Partnership Agreement between the European Union and Africa-Caribbean & Pacific states formally links aid to ICC ratification; a condition not likely to impact more developed (and influential) countries such as the U.S., Russia, and China. Revisiting this information, and hearing some for the first time, calls into question one’s pre-conceived notions about international justice mechanisms, such as the ICC. In one sense, I left the day believing that ICC was fairer and more valid than I previously thought.

But in another sense, I was left with more questions. Is it possible to enforce an international judicial mechanism that is globally “fair”, and by fair I mean all states are subject to accountability, regardless of having ratified the treaty? The idea of “universal jurisdiction” was advocated for at great lengths during the Assembly of States Parties conference held at the United Nations last December, and is a topic heavily debated and advocated for against in many circles. Will this eventuality ever be realized? And more importantly, will it be agreed upon by all states? What incentives will encourage “super powers” such as the US, Russia, China, and other important international actors to ratify the treaty? What are incentives that are preventing them from ratifying?

Obviously there are no clear answers. I believe if you were to ask ten people, you would get a variety of steadfast, determined opinions on the matter. 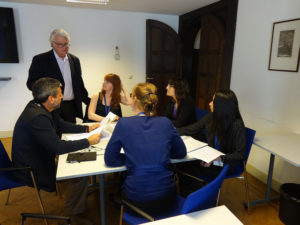 Fast forward a few days, our focus turned to the International Criminal Tribunal for Yugoslavia (ICTY). Our Monday, Bill Stuebner – former Special Adviser to the Prosecutor of the ICTY, and Kemal Pervanic – producer of the documentary Pretty Village and survivor of the notorious Omarska concentration camp, presented an informative and personal account of their experiences of the conflict in the former Yugoslavia and the Tribunal’s successes and failures. Armed with these insights, we visited the ICTY the following day which enabled us to see the principles of international justice mechanisms put into practice.

Upon arriving at the Tribunal, we were ushered through the multiple security points and into the grand main entrance area of the court building. We were then seated in the courtroom viewing area, where we watched the morning’s proceedings of the trial against Ratko Mladic, Colonel General and former Commander of the Main Staff of the Army of Republika Srpska. Mladic is on trial for five counts of crimes against humanity, four violations of the laws or customs of war and two counts of genocide. These charges include his participation in the joint criminal enterprise (JCE) to eliminate Bosnian Muslims in Srebrenica in July 1995, when approximately 8,000 Muslim men and boys were killed. During this hearing, we were privy to the cross examination of a defense witness, former Chief of Staff of the 1st Krajina Corps, Bosko Kelecevic, where we witnessed first-hand how everything matters in a court room, from tone, to pronunciation, to verification of facts.

Mladic himself seemed composed, tired, and dare I say it bored, glancing over at us in the viewing gallery a few times and staring. He in fact, closed out the session with a wave in our direction, an action tinged by defiance, as he was quickly reprimanded for breaking the rules.

This past week has challenged all of our pre-conceived beliefs, notions, and understandings of international justice mechanisms, restorative and retributive justice, state building, and building frameworks for transitions. I am incredibly grateful to be amongst the 40+ participants, hailing from an impressive 24 countries. The perspectives everyone contributes has just inspired, humbled, and enlightened me, and I truly wouldn’t change this experience for the world; no matter how perplexing these topics can be at times.

I am honored to be amongst world changers and peace makers here in The Hague, a group of people who are willing to push boundaries, examine the tough questions, and be in a constant state of inquiry and reflection; all with hopes to impact the world for the better.