After diving headfirst into fixing the post-conflict situation in Libya, guided and inspired by the highly 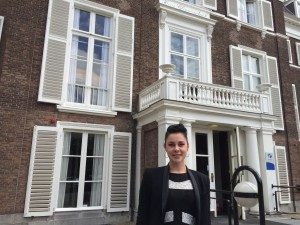 accomplished and somewhat hard-core transition specialist and practitioner Audra Dykman, the scene was set early on in the piece for a culture of fearlessness and innovation. These two qualities really stuck with me.

The first was evident by the stalwart lack of acceptance of the international conflict status quo by the group, coupled with another (also staunch) lack of acceptance of any limitations to resolving conflict. ‘Impossible’ was irrelevant and the group instead interpreted impossible as the declaration of a challenge. Fearlessness tempered by operational and academic understanding produced some interesting agile solutions to the Libya conflict as the scenario progressed.

The fearlessness and enquiry was also brought to light in a more comical way in the last hour of the day, when we heard from Robert Freidman, Attorney of the US State Department who spoke on his role and the upcoming delegation to the Chemical Weapons Convention. This did not stop the group’s inquiry expanding in scope to request predictions in the outcome of the South China Sea dispute, details of the US/Iran nuclear disarmament negotiations and questions over why the US would not ratify the ICC Statute and UNCLOS. Despite the breadth of the barrage, the group was satisfied with most answers, even if there may have been a degree of agile sidestepping and “lawyering” required to protect US national interests.

The second quality was embracing innovation in the conflict space. After working through the characteristics of implementing a situational awareness strategy for conflict transitions, things began to feel oddly familiar. Factors such as engagement, experimentation, robust consultation and transparency, innovation, flexibility, hybrid modeling, promotion of resiliency and social cohesiveness, have broad coherence between institutional change management within the corporate space. This even extended to the comparative handling of leaders in transitional situations: should directors/national leaders be removed if they are unable to adapt to organisational/national change or were responsible for perpetuating an unhealthy/unjust institutional/national culture and operations/governance. Obviously a large commercial institution is a microcosm compared with the wide range of institutions involved in transitioning a conflict but the comparison gives rise to contemplation.

The day’s discussions challenged us to think and re-evaluate assumptions about the intractability of conflict and the traditional mechanisms used to transition conflicts. We can perhaps look to the corporate organisational change space to develop some cross-discipline lessons learned to develop a greater understanding and some fresh strategies to transition societies.