At the end of the second week of the symposium, we set out to resolve a number of the complex and interconnected 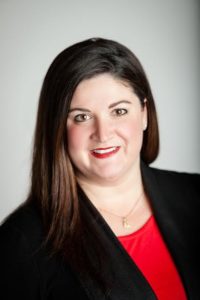 challenges bedeviling the Wardak Province in today’s Afghanistan. Armed with myriad useful tools and historical wisdom gained from the first fortnight of the symposium, we were thrown into a simulated version of the post-conflict situation in this province.

Leading this exercise were Kevin Melton and Justin Richmond, both seasoned practitioners in an array of post-conflict situations.  Justin comes from a military background and has served in the field in China, South Korea and the Philippines.  As a civilian, Justin worked for USAID in Afghanistan.  He is now the founder and executive director of IMPL; a data-driven non-profit firm focused on improving humanitarian stabilization by rigorously documenting successes and failures in the field for scholarly publication of theories. His work also involves mentoring local civil society groups in best-practice data usage, advocating for data-driven programming, collaboration, transparency, and cross-sectoral solutions, sponsoring research and development and training the next generation of field practitioners.  Kevin deployed as a civilian to the very kinetic Southern Afghan province of Arghandab as part of USAID’s OTI District Stabilization Initiative. He has also served as a governance and development advisor to the commanding generals of ISAF forces in Kabul.  He is now back in DC, heavily involved in international development and policy. 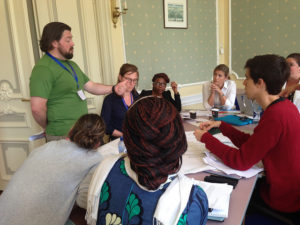 Kevin and Justin designed a simulation for the symposium participants, which, in phases, very closely mirrored a real-world environment.  We were broken into eight clusters, based on our individually expressed interests that represented various sectors of development: governance, rule of law, security, infrastructure, health, education and economic growth/livelihoods. We were provided with a robust information package, explaining the situation in Wardak on all levels: from the Taliban’s involvement in government to citizens’ access to fresh drinking water.  Each cluster was tasked, in the first two hours – simulated to represent 30 days – to develop proposals for their sector’s programs given the background information and specific data provided.

So there we were: fifty motivated, passionate problem solvers in eight clusters facing one extremely challenging task. Or was it eight separate tasks? What was the overarching objective here? How could I ensure that my group comes up with something brilliant and achieves success by the end of the simulation?  We enthusiastically dove into our groups and brainstormed with fervor: in 8 individual groups.

After “30 days,” we were provided with data that revealed some disappointing news for a few of the individual projects we were planning.  A few hints from the facilitators reminded us that perhaps we would want to chat with the other clusters to see if we could collaborate in certain areas. Well intended, ad hoc discussions commenced.

Between “days 30 and 60” we started learning to collaborate more because some of our data was revealing both gaps in focus (“I thought that was more of a task for another group”) and redundancies of effort.  Some of the decisions we wanted to make had 2nd and 3rd order effects we hadn’t thought about and we had to use the expertise and resources of the other groups to try to sort through these new problems.

We learned a lot about how wicked problems can create a great deal of emotional investment, and that we, as passionate and well-intended people, react strongly when we are invested.  We have to ensure that our good intentions going in are flexible enough to take into account the realities of the situation and that they have good implications when we are on our way out.

By the end of the simulation, it was obvious that, somehow, we had to work together to achieve success. 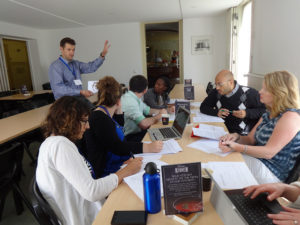 Resistance to collaboration comes from competition and a desire to achieve success….but who are we succeeding for?  For ourselves? For our groups? For our donors? No, we were reminded: success is measured by the local community you are there to serve.  Moreover, success cannot be achieved FOR them, it must be achieved BY them. Projects must have practical applications and be productive and useful to the population in the long term.  Just because something seems like a good idea in (insert applicable state or provincial capitol here), it is not necessarily a good idea on the ground.  They have to want it, they have to build it, and they have to sustain it – regardless of what we think we want for them.

Justin said it several times: be humble and curious.  By keeping this advice in mind, perhaps we can ensure that the roads we build are paved with more than just good intentions.