When “Divine Love” breaks common ground between Christians and Muslims 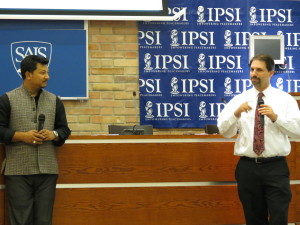 On Wednesday 15, and Thursday 16, July 2015, trainers Michael Shipler and Rajendra Mulmi coached the Peacemakers at the 2015 Bologna Symposium, to search for common ground during conflict prevention, resolution and reconciliation.

On the first day of July 15, 2015, numerous metaphors were used to reflect on the strategies that peacemakers use. One of these was a conflicting 6 and 9 positions which IPSI delegates were to study. Whilst one person can read 6 from one end, the other person will read 9 from the other, but inverted positions still give 6 and 9 reading to each person. This exercise showed how a facilitators ought to focus on the “facts” in conflict rather than a perception, in the search for common ground.

A game of coloured dots; red, blue, green and orange were put on the delegate’s foreheads with instructions of behaving in certain ways towards other players identified with different colours. For example, all forehead doted members were to ignore and NOT talk to the red doted forehead members. The essence of this simulation was for all of us to experience how discrimination and stereotyping can often distort the judgement of peacemakers, in the search for common ground.

The most memorable exercise of the day for me; was learning by watching the steps taken to facilitate the mediation by consensus building in a video titled: The Imam and the Pastor, (1990), by Pastor James Wuye and Imam Muhammad Ashaf, in the following YouTube video:

In this video, a novel lesson about Islam teaching marked the turning point of the search for common ground. This was announced by Imam Ashaf in the following terms:

“You have the right to take revenge … however the Quran teaches us otherwise. Prophet Muhammad in Macca, was persecuted. He was humiliated. Sent out

[from the mosque], he went to the city of Taif … to preach but they gathered the youths to stone him … until blood was flowing over his body and the Angel came and said oh you prophet of God … do you want me to destroy these people – NO said Muhammad forgive my own people.”

Prophet Muhammad hence, made a plea to the Angel of God, to spare the lives of those who stoned him. In so doing Muhammad demonstrated in the view of Ashaf that LOVE of fellow human beings, must be the central teaching of Islam and the Koran.

Similarly, in the Bible, Jesus states in John 13-34: “a new command I give you: Love one another As I have loved you, so you must love one another.”

These two messages of a divine LOVE from the founders of the two religions appeared in my view to be the central lesson of the day that broke the common ground between Christians and Muslims in the conflict which pitched Muslims and Christians in Nigeria, and which resulted in numerous deaths in both communities. 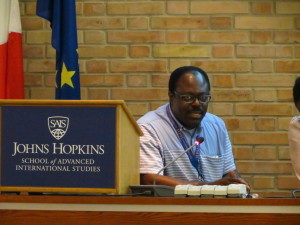 feelings of revenge towards the Christians, and led to the success of the reconciliation between the two divided Christian and Muslim communities.

On the second day of 16 July 2015, our journey in search for common ground led us to role-play a simulation about a building of a mosque near the site of 9/11 in New York.

The results of our simulation showed equally that the tensions between various religious movements is still very much a “sensitive” issue. The group that I facilitated concluded that whatever outcome arrived at by the religious communities leaders in the conflict about the building of a mosque near the site of 9/11 would be, we hope, guided by the memories of thousands of people whose lives were lost on the very day of 9/11.