Last Wednesday was a very special day for me.  I was very much looking forward to Wilbur Perlot’s class on international negotiation.  Whenever negotiation was on the schedule during my undergraduate degree it was interesting to see how my own behavior, as well as that of my fellow students, would change under pressure. Given my educational experiences and background I had assumed that the day would not yield any major surprises, but I was wrong.

During the first negotiation situation, Wilbur gave us an ambiguous morality story called ‘crocodile river’ which is 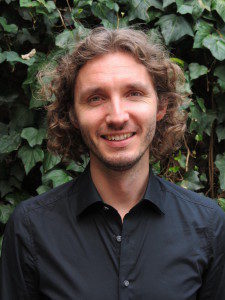 about a girl who decides to sleep with somebody as leverage to get to her true love. When the lover learns about the trade, he dismisses her and she, in turn, laughs at him when he is beaten up by one of her friends. Wilbur asked us to rank the different characters in the story individually and then come to an agreement as a group within 15 minutes.

This process led to some friction within the group and, at least for myself, also to personal frustration. Feeling that I did not have a stake in the outcome, I was very surprised when my group asked me to negotiate with representatives of the other groups. They perceived me differently than I did.

In the following 5-person negotiation, we could not reach any agreement because one group stymied the negotiations. Time also limited our ability to reach consensus. During the debrief, however, Wilbur gave us valuable strategies on how to deal with group dynamics and obstructing parties to a negotiation:

Following Wilbur’s course, we had the distinguished honor to welcome John’s Hopkins University Professor, Dr. William Zartmann. With great knowledge and wit, he introduced us to his life’s work about international mediation theory.  He analyzed the factors beneficial to mediation and the different levers a mediator can bring to bear in blockade situations, such as the one we experienced earlier on. The following day we had a second negotiation situation based on the Uganda/World Bank negotiations from the mid-nineties.  These negotiations went much more smoothly than ‘crocodile river’, with every group finding consensus.  Since it occurred the following day, we were able to use both Wilbur’s strategies and Dr. Zartman’s knowledge successfully. 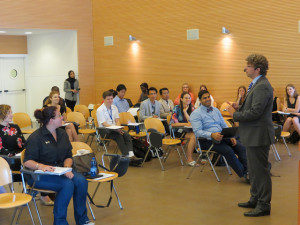 The direct relation of theory and practice were the main reasons why I chose to participate in the Bologna Symposium.  Wilbur was outstanding in his application of this educational strategy and, kudos to Dr. Zartmann for sharing with us his tremendous knowledge–may it benefit us as the world’s next generation of peace leaders!