Searching the Soul for Peace 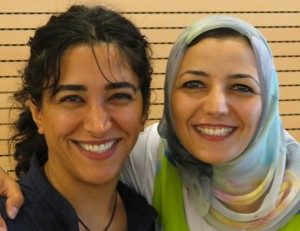 training day to write a blog post reflecting our thoughts on what we had learned. After contemplating my options for a long time, I decided to write about non-violent resistance (assuming that it would be a meaningful topic to focus on). Yet, here I am, writing my way through this blog, realizing that words are much easier than actions.

While I was listening to Mr. Jack Duvall (the President and Founding Director of The International Center on Nonviolent Conflict) speak about nonviolent resistance in civil society, its history, and practices around the world, I was thinking of all the innocent people who suffer violence, discrimination, and injustice for so long.

I live in the Gaza Strip. No one can imagine how difficult it is for me to write about nonviolent change while my country (Palestine) is going through a horrible war. While I am here in Bologna learning from the ICNC team, my thoughts are wondering how my family back in Gaza is doing. Are they safe? Is the bombing happening around them? How will I find Gaza when I am back? Will it be so destroyed I would not recognize anything? Will my favorite places be wiped out as it has happened before? Will I find that little cafeteria on the Gaza beach destroyed or will it still be there for me for a few more summers to come? Most importantly, will I find my family there in Gaza safe and sound, waiting for me? I pray for their safety every moment of every day and I am scared to receive news, at any moment, about them gone with one of the hateful attacks! The mere thought makes the blood freeze in my veins…

More than 20 days have passed since the offensive started and it does not seem like the diplomatic solution is progressing. The people of Gaza are stuck in a war between Israel and Hamas. Every time professor Mary King spoke about Mahatma Ghandi’s nonviolent movement for peace, the peace movement in South Africa, the four decades of interaction between African American and Indian independence using peaceful methods, I found it difficult not to shift my thoughts back to lost colleagues and mourned friends who have lost their lives and/or their entire families simply because they lived in Gaza and have no place to hide.
There is no sanctuary in Gaza; there are no bunkers or safe havens. The airstrikes that killed my friends were not necessarily targeting them specifically. My friends were killed because the Gaza Strip has a high population density—4,505 people per km² populated by 1.6 million people –half of them children living in a 365 km² area. The rocket targeting your building will not ask if you are a terrorist or not.

Sometimes, it is difficult to have peacefully-oriented thoughts amongst all this frustration and sadness. However, having suffered from the exact same situation my entire life, I am convinced deep in my heart that peace and only peace is the solution for a better life for our future generations. This will not be achieved through violence. Both parties have tried violence for more years than I care to count and the cycle of hatred is getting longer while a peaceful solution is becoming more elusive.

Nevertheless, I have found in my heart the strength to work on recruiting nonviolent methods to reach peace. This is despite the suffering of my people and the ugliest faces of oppression and violence. Regardless of all the frustration I feel, there is still hope, and it is not too late. We can still secure a better future for our children and give them an independent peaceful Palestine through nonviolent resistance.
As David Hume (1748) said, “people, for the sake of order, abandon their native liberty.” and I believe that, for the sake of our liberty and peace, we can also abandon our need for revenge. We owe at least this much to the memory of our beloved fallen ones.

The question is: will this very remarkable IPSI 2014 group of participants make peace one day?