Putting Peacebuilding to the Test

Take thirty six individuals: lawyers, students, and practitioners, train them in transitional justice and pragmatic peacebuilding, and then put them to the test. This has been our life for the past 72 hours. We’ve each been given roles, depicting international or national actors, and a detailed dossier outlining our interests and goals in the building of a transitional government in Beladusham, a fictionalized Syria. 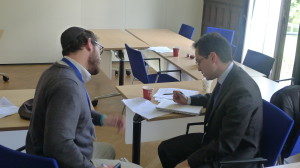 At the surface, the goal of the simulation appears simple: negotiate with all other parties to create a framework for a post-conflict transitional government that is satisfying for everyone. However, anyone participating would surely tell you otherwise. After spending the first day mapping out the priorities and interests of the different parties involved and building an alliance network, day two was supposed to involve a series of high-level meetings to focus on the finer details of the transitional framework in the areas of security, governance, aid and reformation, and justice. Scheming and backdoor diplomacy were in full mode. Emotions were starting to run high and slowly the halls of Clingendael had transformed into a very small replica of the global political arena.

By high noon, just hours after our first meeting on aid, which had not gone over so well, we found out that the two fighting 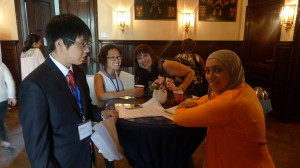 parties from Beladusham had joined forces without the knowledge of any international parties and had written a preliminary draft of a new constitution. Of course this did not go over well with everyone who had been left out.  The rest of the meetings were cancelled as we tried to grapple with the unthinkable. “How dare they go behind our backs!?” I heard one participant portraying the United States approaching down the hall. Strategic planning turned to outrage and screaming and parties tried to grapple with how quickly the warring parties had decided to become a united front. It was indeed strange to see this reaction take place. Of course peace was our end goal, but that it happened so quickly and without the facilitation of important “key players,” turned off many individuals. Perhaps this is valid insight into the way real world politics work. In the obsession with self-validation and personal interests many international state players take away from the peace building process rather than contribute to it or celebrate it’s progress. 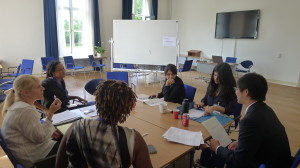 There was a moment where I stopped in the middle of my running around to observe all the chaos and screaming and deliberating. The words of Charles Dickens yet again came to my mind “It was the best of times, it was the worst of times, it was the age of wisdom, it was the age of foolishness, it was the epoch of belief, it was the epoch of incredulity, it was the season of Light, it was the season of Darkness, it was the spring of hope, it was the winter of despair, we had everything before us, we had nothing before us.” We were so busy in trying to be in a hundred places at one time, trying so very hard to figure out how to manipulate the situation to our own advantages that we’d forgotten everything we’d learned. It became easy to discuss numbers and returns, interests and funds, and the people of Beladusham were quickly forgotten. There were no talks of capacity building, nor of reconciliation processes or sustainability, everything was as a macro level, the finer details left to be hashed out later. Of course a peace process is hard to portray entirely in a matter of two and a half days, but then many of these decisions would probably not be any different no matter how much time they were allotted. Many of these decisions are made in the moment, a result of the collision of many factors.

One thing that I heard repeated over and over in the past two days is how much of a struggle it has been for people to stay in role, and prioritize their given national interest with individual interests. It’s made me realize that policies on a national level function like a machine; there really is no room for spontaneous flexibility. And it has rejuvenated my belief that local organizations are able to creatively come up with more sustainable, better solutions. Perhaps Dickens has it right: perhaps we are foolish in thinking that next time we won’t repeat the same mistakes. But the last two days has me thinking how exactly can one navigate the waters of diplomacy and sustainable peace and will the two ever really be compatible or are we just delusioning ourselves?