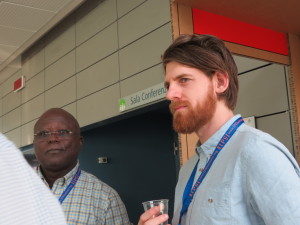 situation that could lead to mass atrocities. Let us be an example of thoughtful solidarity.” – Madam chairperson.

Wednesday marked our first simulation, and being only the second day, it proved an interesting test for all involved. Our task: to attempt to resolve the violent civil war consuming the fledging former Yugoslavian state of Bosnia-Herzagovina. Obviously the Bosnian War was 20 years ago, and so we were transported back to April 1993 to a mock meeting of the Organisation for Security and Cooperation in Europe (OSCE, or as it was known then, the CSCE). Indeed, such a meeting is a counter-factual, or hypothetical, but nonetheless the dynamic international organisation provided an opportunity for a wide range of actors to be portrayed, including CSCE council positions, representatives from the three warring parties (Bosnian Serbs, Bosnian Croats, and Bosniaks), as well as representatives from over 30 CSCE member states. With only six and a half hours available to reach a solution, the stage was set for a manic day.

The day began with a stirring introducing from the chairperson, followed by all of the members of the council, as well as the individual observers, stating their positions. It was clear that the parties to the conflict were keen for a resolution, but there remained, at least early on, little consensus on exactly how to go about doing so. Such questions were perhaps best summed up by the representative from Belarus, who forwarded: “we have a saying in Belarus, which is more practical, freedom or sausage?” Indeed, which we would come away with at the end of the day was not immediately known.

After opening remarks the council adjourned and the representatives began to meet in their regional groups: CSCE officials, NATO, the European Community (EC), the Commonwealth of Independent States (CIS), with a few neutral or non-aligned countries floating around the periphery. NATO it seemed was keen to flex its muscles early, registering their commitment to engaging in unilateral military action should the Federal Republic of Yugoslavia and the Bosnian Serbs prove unwilling to work towards a peaceful settlement.

From there the bargaining commenced. Members from the Russian dominated CIS met with the FYR and Bosnian Serbs, NATO met with the CIS, Croats and Bosniaks met with NATO, and CSCE officials met with everybody while trying to work out key elements and discussion areas of the gestating peace agreement. Clear divisions on questions of amnesty for war crimes, maintenance of peace, and the influence of NATO within the region appeared early. The Nordic-Baltic Alliance, featuring Norway, Sweden, Denmark, Estonia, and championed gallantly by Latvia, put forward a plan for an impartial peacekeeping force constructed from troops within the alliance. The proposal seemed to provide an antidote to concerns with NATO flexing its military muscles.

Two hours of back and forth discussions led eventually to a loose framework where upon all of the parties could again convene to facilitate the building of the final agreement. Early concessions were achieved on areas of a cease-fire and a conditional recognition of borders and disarmament, but questions on a proposed peacekeeping force and amnesty remained difficult. The Nordic-Baltic Alliance’s offer of peacekeeping troops to the conflict allowed the parties to resolve the question of peacekeeping, but on amnesty it was only after ongoing discussions, and a last minute off-the-record meeting between the major parties, that a compromise could be reached and a peace and reconciliation tribunal was established. With that, despite some late clarifications and jitters, a complete peace agreement was reached.

The representatives from Russia, Canada, Belgium, Latvia, and of course the madam chairperson, worked diligently to ensure discussions progressed and that an agreement was reached that was acceptable to all conflict parties and members of the CSCE.

After a well needed tea break we reconvened with Professor P. Terrance Hopmann for a debrief. It was refreshing to be able to step out of our adopted roles and discuss the events of the day. Hopmann praised the adoption of a truth and reconciliation commission as a more appropriate mechanism than the International Criminal Tribunal for the former Yugoslavia, seeing it as “a better way to handle lots of shades of grey.”  That we were able to come to an agreement on so many substantive issues within such a short amount of time is a testament to our collective commitment to obtaining peace.

All in all, this first situation provided a fun and eventful introduction to many of the simulations that will be conducted throughout the symposium.