Facilitation Training: The Art of Perception

Any avowed art aficionado has, at some point, viewed the famous perceptual illusion of the “Young Girl- 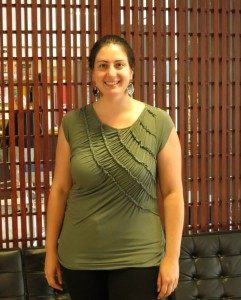 Old Woman” and has more naturally seen one image over the other. Personally, it doesn’t matter how many times I view the illusion; on every occasion, I immediately see the old woman and need someone near me to specifically point out where the young girl comes into the picture.

This was the manner in which our mentors from Search for Common Ground, Michael Shipler and Rajendra Mulmi, began our facilitation training this past Wednesday. Despite introducing this image early in the morning when some of us were still bleary-eyed from a lack of proper caffeination, Michael and Rajendra immediately acquired the rapt attention of the room. We were all somewhat entertained and perplexed at the illusion before us, wanting to make sense of the oddity.

Another question of perception was introduced, as Rajendra took sheets of paper with a number on it, placed it on the floor and asked candidly, “Is it a 6 or a 9? Which is right?”

Due to my spot on the back-right side of the room, my mind immediately stated, “9. It is a 9…” before any other mental gears began turning. Numerous peers of mine shouted out “6…” and some eagerly “9…” but then the room became silent for a moment as the visual illusion began to sink in.

Rajendra cracked a half-smile and explained that depending on where you stand, this number– this glyph– could be either and both 6&9. “But,” he continued, “what’s important is how you bring the two together to merge understanding from both sides.”

These visual illusions transformed into a poignant metaphor for the process of facilitating and detailed the diverse perceptions that occur within facilitated dialogue.

Like the images shown to us upon arriving that morning, perception proved to be the key factor is answering any of these vital questions. In facilitation, your self-perception and the keen awareness of how others perceive you becomes essential to initiating the facilitative process, to getting to know the parties in conflict, and in building trust between them and the facilitator.

Rajendra & Michael demonstrated this intricate lesson through another social exercise. “Close your eyes. We are coming around to put a colored sticker on your forehead.” After getting a round sticker stuck onto the middle of my forehead, I opened my eyes and saw that my peers had one of three stickers–yellow, green, or red– placed on their own foreheads. Our mentors handed out a small slip of paper detailing the instructions of the exercise and told everyone not to share what the paper said with anyone else.

Mine read, “Seek out the yellows and try to speak to them for as long as possible, say hi to the greens, and do not approach the reds. If they speak to you, ignore them.”

We were given five minutes and walked around, interacting with everyone… well, mostly everyone. I felt terrible ignoring those of my peers with red dots on their heads, so I gave an awkward wave and smile as an acknowledgment but did not verbally say hello and proceeded to locate as many yellows as possible.

At the end of the exercise, Michael and Rajendra asked us to reflect on what we witnessed occur. They passed the microphone to members of each sticker color and asked them what color they perceived themselves to be and why. Some people were spot on with their colors, saying things like “I thought I was red because when I would approach people to say hello, they would physically turn their backs to me or would avert my gaze. I kept trying but eventually felt really sad and isolated and just sat down.” Some others thought they were in a different category than they actually were (which elicited some giggling from the group).

The yellows said that they felt really strange just talking to other people with yellow dots on their forehead, but they were happy to belong to a group, to at least experience a sense of closeness to some others. The greens felt like wallflowers, like “that kid who is invited to the party but then isn’t talked to by anyone there.” They received ambiguous messages that prevented them from really forming any conversations– and consequently– relationships with others.

We all discussed this perception strata that happened in the room, a fake construct that emerged from a single slip of paper– and then applied it to societal relations. The exercise provided clarity on social interactions within societal bounds, the kinds of subtle discrimination and biases we carry out in our day-to-day interactions with others. How many times do we turn away from the ‘red dot’ people and subconsciously place them in an out-group?

As effective facilitators, it proves paramount to recall these lessons of the ‘facilitated other and self’ and remember to be as impartial and objective as possible with others– to try and see the young girl and the old woman, to visualize merging the 6 and the 9. Our perceptions very much shape the contents of our reality, especially when we try to truly understand the essence of others.