By Maaike van Adrichem, The Netherlands 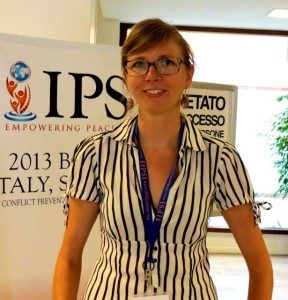 We all know them: the nay-sayers, the know-it-alls, the avoiders and the distractors. On the second day of the facilitation training we were challenged to take on the role of different types of people that any facilitator will run into. During the first facilitation training day Rajendra Mulmi and Michael Shipler from Search for Common Ground, an organisation specialised in conflict resolution, helped us become aware of the importance of knowing yourself, the prejudices and stereotypes you carry within and others attach to you. Today we got to know the ‘facilitated other’. Michael and Rajendra took us through the different steps of facilitation, in which understanding group dynamics and the different roles and positions people take on is essential. The different stages in group dynamics were explained as moving from forming (the group is getting to know each other), to storming (there may be differences of opinion, the members are moving in different directions), to norming (some shared norms surface and some group members adhere to them) and finally performing. Any group will go through a process of forming to storming, to norming and finally performing and it is the main challenge for the facilitator to actually arrive at this last stage.

‘In order to get there, you don’t need to go there’

The trainers showed us an inspiring movie on the process of making of a peace song in Nepal, bringing together musicians from different parties and backgrounds. The video illustrated one of the key messages of the trainers: in order to deal with conflict, you don’t necessarily need to tackle it directly, but rather set up a dialogue process to bring people together to work on shared interests instead of stressing their different positions.

Building on their wealth of experience in facilitating dialogue and creating the conditions for people to move from competing to collaborating, the trainers took us through the seven different stages of a dialogue process:

Dancing with the flow – being the banks of the river

Being a good facilitator requires skills in convening, foresight, questioning, empathizing, but most importantly, listening. Listening, and asking the right questions seem like simple traits but in reality they might be the hardest. Facilitating group processes requires flexibility and skill. Michael referred to a good facilitator as being like the banks of the river, keeping the stream narrow and under tight control or letting it flow loosely.

Designing a dialogue on the ‘Ground Zero Mosque’

After these thought-provoking sessions, it was time to break into groups and apply the theory to a practical case study. Every group was challenged to come up with a comprehensive project proposal to set up and facilitate a dialogue process on the 2010 controversial ‘Ground Zero Mosque’ discussion. We were introduced to the discussion through clips from different news agencies (from Fox News to CNN) and even the hilarious  Daily Show, which already gave us a sense of how challenging it would be to find common ground among parties who sometimes hold extreme views and have different interpretations of reality.

Despite the very challenging subject, all groups managed to come up with a project proposal, which was presented, often very creatively, to a critical jury consisting of the Search for Common Ground staff and IPSIs own Andres Martinez. The ideas ranged from creative and ambitious (food festivals and inviting Oprah Winfrey as a convener) to very practical and feasible. Going through the process of developing an actual proposal for getting different parties to engage in a dialogue really showed us how challenging it is to analyse all aspects of the conflict and frame the issues to create solutions rather than focus on the differences.

The power of reframing

All groups agreed that the different parties in this particular conflict held many shared positions, such as pride of being a New Yorker, sharing American values and a longing for a sense of security, that could actually persuade all parties to work together. This way, the conflict was reframed from controversy over whether there should or should not be a mosque, to honouring the memory of 9/11 as a driver of peace. The hands-on experience of designing this facilitation process was a great way to feel the power of reframing, but also how difficult and time-consuming this process can be.