I must confess that I have had an amazing learning experience at the IPSI Bologna 2013 Symposium so far.  I 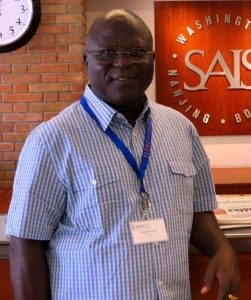 really found it difficult to put my finger on any aspect that I most prefer, simply because the whole program seems holistic to me.  I will therefore only attempt to catch snippets of what I have learned within this short period.  That the days have been moving fast is a testimony to the intense, interesting and challenging packages that are contained in the program.  The feeling has been awesome.

Michael Shipler and Rajendra Mulmi did an excellent job at making me realize that there is a difference between training and facilitation.  I found out that while training has pre-determined outcomes, facilitation does not enjoy that luxury. Facilitation in this context refers to the ability to bring disparate groups together with the aim of exploring how to create a common ground.  And facilitation is often enhanced through a conflict assessment process that looks at the type of conflicts; how they are manifesting; what is happening and what are the root causes; who is involved and why; and the identification of the small changes that could be leveraged to create the biggest change.  They pointed out that the stages of facilitation include forming, storming, norming and performing. The skills that a facilitator should have include convening, foresight, questioning, listening, empathizing, dancing with the flow among others.  I also learnt the need to frame the issue and to also ask questions that will unlock the underlying positions and interests of the parties to the conflict. The types of questions to ask in a dialogue process could include objective, reflective, interpretive and decision questions.

One thing I again observed in the mediation process was that it offers a non-adversarial approach to the resolution of conflicts and it also offers a unique opportunity for a third party to help. The challenge of the mediator is to understand the position, interest and needs of the parties to the conflict. In fact, a mediator is often seen, as a conflict engagement specialist whose ultimate goal is to empower the parties to resolve whatever differences may exist between them in a collaborative and sustainable manner. Which reminds me of the what Professor Bernard Mayer advocated in his book “Beyond Neutrality” to the effect that a mediator plays the role of ally, coach, strategist and organizer.   As they strive to assist the parties to reach a negotiated settlement, mediators must be conscious of the fact that as much they have power to manage the process, they have no control over the outcome. In facilitating the process the mediator is expected to employ various techniques to open dialogue between the parties.

In fact “process” is a very crucial part of mediation architecture in that it provides space for the conflicting parties to freely air their thoughts, feelings and experiences.  Issues that are contributing to the conflict are revealed through the narratives of the parties. If the process is adequately managed and given time and attention, it often leads to the reaching of a mutually agreeable solution to the conflict.  I strongly believe that through mediation even the most difficult conflicts can be amicably resolved.  This is done through a voluntary process, in which the parties workout their own solutions based on broader issues that could produce outcomes in which they can end up even better off than they were before the conflict began. We must realize that it is not about the mediator but all about the parties involved. This brings out the need to be trustworthy and impartial, in other words the mediator must be an honest broker with the ability help the parties to connect at the “need” level.

Ultimately, I have realized that the path to peace is replete with a lot of challenges that are often capable of derailing the whole process. However, I was encouraged when I equally realized that the thread that runs through all the gamut of conflict situations is humanity. I also found out that a concept that runs through the whole approach to conflict resolution is the dialogue process or the need to talk. And facilitation plays a keys role in making this possible. And as Robi Damelin said to us “It won’t stop till we talk”.