UNSCR 1325 Bringing Women to the Table

“Women bring a different perspective to the table,” said Dr. Joyce Neu during her first day at the 2013 Bologna 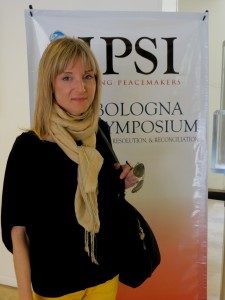 Symposium. Dr. Neu, a seasoned mediator who has been engaged in conflict assessment, mediation, facilitation, evaluation, and advising at the official and/or unofficial level in sub-Saharan Africa, the Baltics, the Balkans, the Caucasus, Cyprus, and Sri Lanka for more than two decades, emphasized the importance of including women in peace talks. “We need to move away from exclusive peace processes, and include women and civil society organizations (CSOs),” she said during our brainstorming exercise on Syria. How do we do this in reality though, when a prerequisite for a seat at the table often is having carried a gun during the conflict? While much still needs to be done, the importance of women’s inclusion is being recognized and some mechanisms to push the agenda forward are in place.

United Nations Security Council Resolution (UNSCR) 1325 was unanimously adopted by the UN Security Council on October 31, 2000. It was the first time that the Security Council, the most powerful decision making body of the United Nations, responsible for international peace and security, recognized the disproportionate impact of armed conflict on women. For women around the world the adoption of this resolution was hence a long awaited milestone.

UNSCR 1325 recognizes the potential of women’s contribution to the prevention of conflict and peacebuilding efforts and demands that member states take effective measures to promote women’s rights, including increasing women’s representation at all levels of decision-making. Often referred to as the three P’s, the emphasis of the resolution is on women’s participation in conflict prevention, peacebuilding and reconstruction; protection of women and girls’ human rights during conflict; and the prevention of sexual- and gender-based violence (SGBV). Occasionally a fourth P – promotion of a gender perspective – is included in the “P’s”. In moving from seeing women as victims to recognizing them as peacebuilders and decision-makers the resolution also encompasses a transformative element.

UNSCR 1325 further calls on the Secretary-General of the UN to take significant steps to appoint more women to high-level positions within the UN system, such as special representatives and envoys. As Dr. Neu pointed out during one of her sessions, one argument often cited for the low number of women in high-level positions, including as mediators, is that there are no women with the required skills. As Dr. Neu stressed, this argument however, seems somewhat odd, as women have been working as peace-builders, mediators and negotiators long before the adoption of any Security Council resolution in this regard. Women are often the bridge builders in their communities. They are the ones who hold families and communities together during conflict and the ones who peace them together during the post-conflict period. Indeed, women often have first hand experience in mediating and building peace.

But is UNSCR 1325 just a piece of paper or does it really have an impact?

Article 25 of the UN charter states that, “the Members of the United Nations agree to accept and carry out the decisions of the Security Council in accordance with the present Charter.” Hence, Security Council Resolutions are international law and member states are technically obliged to implement them. However, there is as of yet no accountability mechanism in place and member states implement (or not) at their own discretion. The CEDAW (Convention on the Elimination of All Forms of Discrimination against Women) Committee is currently working on a General Recommendation (GR) on Women in Women in Conflict Prevention, Conflict and Post-conflict Situations. When adopted, this GR would provide authoritative guidance to member states on the measures to be put in place to ensure full compliance with their obligations to fulfill women’s human rights during times of armed conflict, and in all peacebuilding processes. The GR would be the first mandatory mechanism for member states that have ratified CEDAW to report on their implementation of UNSCR 1325 (and 1820*).

We still have a long way to go when it comes to the implementation of UNSCR 1325, and women’s equal participation in peace processes and decision-making. We here at the Symposium, and the present and future peacebuilders can make a difference because we recognize the importance of including a variety of stakeholders, particularly women, in all our efforts!