At which point does the Security Council feel that military intervention in a crisis is necessary? 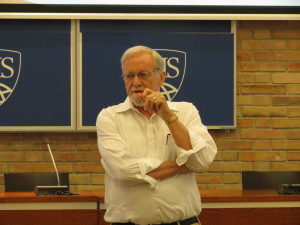 The speaker of the day was Hon. Gareth Evans, an expert in state diplomacy from his experience as an Australian Foreign Minister and President and CEO of the International Crisis Group, just to mention a few of the positions that he has held. He is an avid advocate for the states’ responsibility to protect and was a co-chair of the International Commission on Intervention and State Sovereignty which produced a report in 2001 on the responsibility to protect.

The aforementioned 2001 report re-characterized the right to sovereignty whereby sovereignty is not to be taken as control but as responsibility in both internal functions and external duties of a state. The right of responsibility was taken as encompassing the right to act, to prevent and to build. In the responsibility to protect, military intervention has to be justified and it comes as a last option after all other diplomatic avenues have been explored and exhausted.

In as much as states try to avoid genocide from reoccurring, and the fact that there are steps to follow 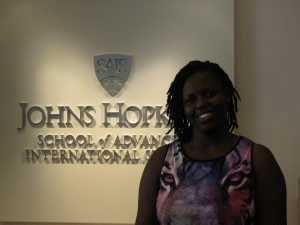 before military action is sanctioned by the Security Council, the question still remains as to when a crisis has escalated to a point of needing military intervention.

In the Libyan uprising, the military intervention was sanctioned by the Security Council after Colonel Gaddafi called people in Benghazi “cockroaches” that would be “exterminated”; words that were familiar and often used during the genocide in Rwanda. Even though the threshold conditions were satisfied, the military action was approved soon after the utterances by Gaddafi, maybe from the fear of a repeat of Rwanda in 1994. This was then followed by the mission changing while on course from a strictly humanitarian aspect to that of a regime removal creating distrust within the Security Council.

The current situation in Burundi is a clear enough example to justify use of force, whereby the military action, as a last option, would be to stop the conflict that has escalated to an almost genocidal point. The use of sanctions and use of other diplomatic measures would not be effective where most of the conflict is sudden and sporadic, and between “civilian” members of a community. Trusting that the government will be able to handle the matter in a humane way is clearly not an option at this time as the said government cannot offer protection to its people that are being slaughtered and it is also responsible for the instability in the country. Considering that the current situation was ignited by Pierre Nkurunziza’s declaration that he wanted to go for an extra presidential term, the neighboring East African countries have refused to intervene in the matter as it might be a future political precedent where political leaders can try to change the constitution of their countries by adding extra terms in their leadership

Some would ask whether the military action would do more harm than good. I believe that it would be better than waiting to sanction it when it might be too late. Or do we need people to be called “cockroaches” that must be “exterminated” for the Security Council to act?

For the Burundian case and all the conflicts arising, the question remains; when does the Security Council feel military intervention is necessary?