Not all the pineapples look alike! A communication exercise with Joyce Neu 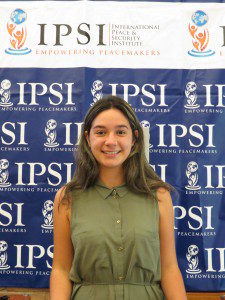 We had the privilege of starting the third week of the IPSI 2015 Bologna Symposium with a two-day training session on conflict resolution and women´s inclusion in peace processes with Dr. Joyce Neu, founder and senior associate of Facilitating Peace, who has been engaged in conflict assessment, mediation, dialogue processes, facilitation, evaluation and advising at the official and/or unofficial level for 20+ years around the world.

During the two days we shared with Dr Neu, we learned about the theory and methodology behind mediation, about the phases of a peace process, the importance of having and or developing good communication skills as mediators in order to be able to deal with negotiating parties effectively and moreover the significance of involving women in peace processes.

We started Tuesday morning with a small exercise in which we were split up into pairs and each given five small plastic chips, sitting right in front of each other. The idea was that participant A would have to make a figure out of the chips without letting participant B see. Then participant A would have to guide his/her partner (participant B) to make the exact same figure with his/her chips. However, the factor of difficulty was that partner B could not speak or use any kind of body language to clarify the directions given and he/she could only listen to what participant A was saying. Then we would swap places.

My partner and I had a very interesting time playing this game. Although it was not difficult for us to communicate (both of us spoke more of less clearly when it was our turn), we realised that we were not as specific as we should have been. We tried to do well-known figures like a fish or pineapple to make the activity easier but we didn’t realise that pineapples don’t always look the same to everyone therefore it was important for us to define how that specific pineapple needed to look like.  But that was just us. Listening to the other groups, other issues came up like the difficulty of guiding someone else effectively as a non-native English speaker, the difficulty of being the only one speaking without getting any contestation or reaction from the other party. Even differences in cultural backgrounds got in the way as not all cultures necessarily communicate in a very direct way.

I think this exercise had the most impact on me because although it was super simple and it was done super quick, it made a very significant point; there are lots of communication barriers of which we (as future mediators) are not necessarily aware of. We tend to assume that people engage in conversations because they are willing to speak, listen and facilitate the process. However, that is hardly ever the case. Reality is that as mediators we are going to face very challenging environments for establishing fluent channels of communication (or at least not conflicting ones). A big part of our job should be focused on planning how to communicate with people that have different cultural backgrounds and how to communicate with people that have very different ways of communicating (direct, indirect, repetitive, not engaging, not listening) as they will be the ones who we will be making peace efforts with.