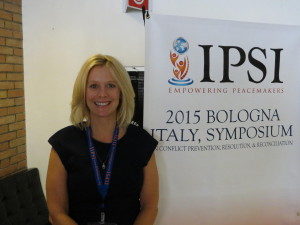 In 1982 the danger of nuclear annihilation  seemed to have been eased but there were many other challenges going on in the world:

The United Nations (UN) was struggling to understand their role as an active player searching for peace.  The UN primary purpose, as is stated in Article 1, includes:

And the possibilities of all the above happening at this time seemed very slim. 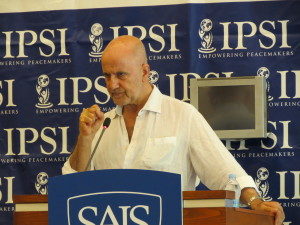 This week, at the Bologna Symposium on Conflict Prevention, Resolution and Reconciliation, Mr. Álvaro de Soto, a Peruvian diplomat and renowned international mediator, spoke with us about the role the Central American struggles played, most notable the Contra war and El Salvadorian FMLN liberation front, in helping shape the UN’s role today.

The long and arduous way for the UN to make inroads to the Central American challenges was over a decade long until they were finally able to reach negotiations.  The learnings, however, were profound for the UN and many leaders around the world.  Most notable they included:

The outcome of these two learnings was coined in the term “Post Conflict Peace Building” by UN secretary General Boutros-Ghali when he realized that the UN was going to have to start doing much more post conflict management going forward to ensure sustainability of post conflict peace accords.

This yielded the birth of “An Agenda for Peace”, a report written for the UN by Secretary-General Boutros-Ghali which outlines the way Boutros-Ghali felt the UN should respond to conflict in the post-Cold War world.  In this document he states:

“The absence of war and military conflicts amongst States does not in itself ensure international peace and security. The non-military sources of instability in the economic, social, humanitarian and ecological fields have become threats to peace and security. The United Nations membership as a whole, working through the appropriate bodies, needs to give the highest priority to the solution of these matters.”

“Peace cannot be kept by force; it can only be achieved by understanding.”  – Albert Einstein

Álvaro de Soto, a Peruvian diplomat and renowned international mediator, led the negotiations on behalf of the UN that brought an end to the war in El Salvador. He has held senior posts with the United Nations, including as a political advisor to former Secretary-General Boutros Boutros-Ghali, UN Special Envoy in Myanmar, Special Advisor on Cyprus, and Special Coordinator for the Middle East Peace Process.